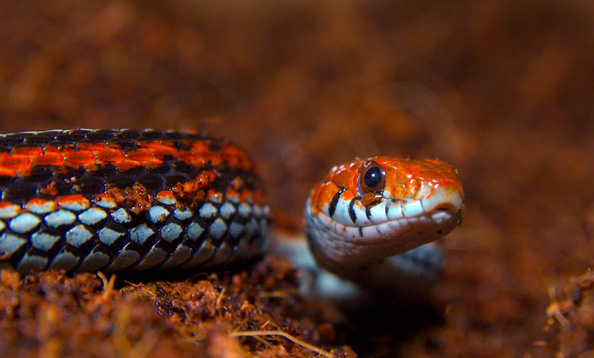 Some call it the most beautiful snake in the world, with its turquoise belly in vivid contrast to its distinctive red and black striped body. Slender and harmless to humans, it can grow to more than three feet long. Males tend to be smaller than females, sometimes up to half the length of a female.

It prefers dense vegetation bordering aquatic habitats such as ponds, wetlands, marshes and sloughs. It also requires nearby open hillsides with rodent burrows for shelter. Carnivorous, the most important part of its diet is also an endangered species: the California red-legged frog. It also eats juvenile bullfrogs, fish, worms, salamanders and the California newt. Newborns and juveniles feed heavily on Pacific treefrogs. If newly metamorphosed treefrogs are not available, the young may not survive. Garter snakes do not constrict their prey, instead they grab and swallow their prey in one motion. The smooth skin of fish and amphibians probably helps the snake to swallow easily.

San Francisco garter snakes and other members of the common garter snake species are among the few predators that can eat Pacific newts without suffering lethal poisoning.

Females release pheromones during breeding cycle to attract males. Garter snakes mate in the spring and fall and are ovoviviparous (producing eggs that hatch within the female's body). Females bear an average of 16 live young. The newborns suffer a high mortality rate and are preyed upon by birds and large amphibians, such as adult bullfrogs (a detrimental introduced non-native species).

Much of the range of the San Francisco garter snake lies within an intensively urbanized and agricultural area of San Mateo County. This snake is primarily threatened by loss of habitat from agricultural, commercial and urban development, illegal collecting for the pet trade, the decline of the California red-legged frog (a main food item), the introduction of bullfrogs which prey on both San Francisco garter snakes and red-legged frogs, parasites, and possible hybridization from breeding with other subspecies of garter snake.

The San Francisco garter snake was officially listed as a federal endangered species in March 1967 and a state endangered species in 1971. The U.S. Fish and Wildlife Services developed a species recovery plan in 1985, and in 2003 increased efforts to improve San Francisco garter snake habitat and improve the public awareness of the snake’s plight.