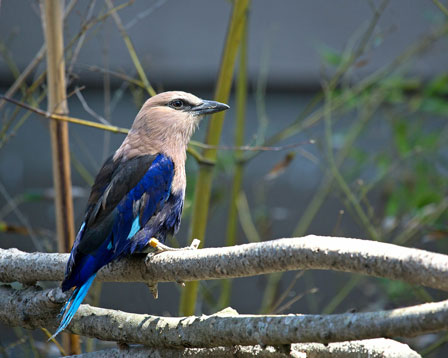 You can find the blue-bellied rollers in the African Aviary.

Blue-bellied rollers have a large head, short legs and a stocky body. They have a heavy downward-curved black beak and a slightly forked tail. Their head and chest are a creamy tan color while, as their name suggests, the belly, wings and tail are bright blue. They have an average wingspan of about 14 inches and are about 11 inches in length. Both males and females are similar in appearance and size.

Juveniles share the same characteristics as adults although their color is paler.

Lifespan is unknown in the wild, and about nine years in captivity.

These birds are found across western and central Africa from Senegal to northern Democratic Republic of the Congo. They prefer lowland or wooded savannas and forest edges.

They feed primarily on insects but have also been known to eat fruits and the occasional small reptile.

Blue-bellied rollers are territorial and live in groups of 3-7 individuals but groups of up to 20 have been reported. Male birds establish a territory and attempt to attract females with their spectacular display. They are believed to be mostly monogamous but males sometimes mate with more than one female.

Breeding occurs between April and July, after which a clutch of 2-3 eggs are laid. Nests are typically built high above the ground in a hollow tree cavity. Both the male and female are thought to incubate the eggs for 22-24 days. Chicks are fed regurgitated food by both parents as well. Fledging occurs around four weeks and chicks are independent by 40 days although they sometimes remain with parents longer.

Blue-bellied rollers are listed as least concern by the IUCN as they are widely distributed and common. Although these birds have no major threats, their numbers have declined in part of their range where deforestation has occurred.