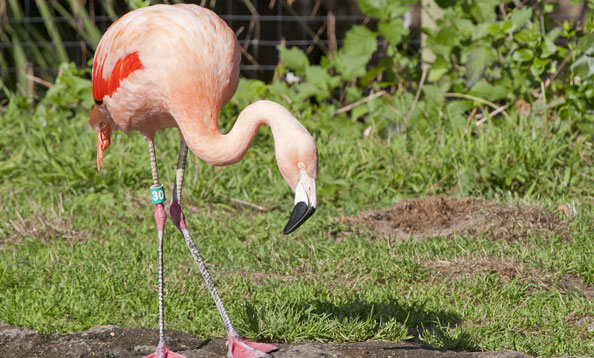 You can find the flamingos across from the Leaping Lemur Cafe.

Flamingos have an elongated, flexible neck, short tails and a long wingspan. The plumage of the Chilean flamingo is paler than other species. Colors vary within a range of white, pale pink, rose and salmon. Primary and secondary feathers are black with crimson along the edge. The toes are short and webbed and legs are not feathered. Legs are grayish and joints are a pinkish-red color.

The bill is black and adapted for its unique feeding method: it is held upside down, and swept back and forth so that tiny organisms and algae are filtered from the water. The bill is bent sharply downward with filtering structures, and the upper jaw fits into the lower jaw like a box lid. The fleshy tongue works like a piston, moving water through the bill’s filtering apparatus.

Flamingos are able to swim as well as fly. They are migratory and fly in a “V” formation. In flight, the neck is extended forward and the legs are extended backwards.

The average lifespan is usually around 40 years; although they may live up to 50 years.

In the wild, flamingos eat algae, crustaceans, brine shrimp, diatoms and aquatic plants. At the Zoo, they are fed a special “flamingo fare”, which is a nutritionally balanced diet with a texture like soup. To preserve their rosy color at the Zoo, their diet is high in caratenoids.

Flamingos are very social when assembled in nesting areas. These birds appear to be monogamous and found in groups that are seldom fewer than 20 birds. Breeding and nesting take place in huge colonies, however.

The flamingo’s voice is loud and rather goose-like and appears to be important in locating young and keeping the flock together when flying.

Breeding season occurs year round, although it is heavily dependent on food availability or environmental conditions. In years where food is scarce, breeding is skipped altogether. During courtship, both sexes participate in ritualized displays, such as ”head-flagging” followed by ”wing saluting“. This behavior is similar to everyday preening and stretching, except they are more stiffly performed. These displays occur months before and after actual nesting.

Their nests are built by scooping mud and piling it into a cone-shaped mound about 15 inches in diameter and about 1.5 to 2 feet high. This nest shape helps to prevent flooding and overheating. Nests are built two neck-lengths apart and fiercely defended.

One egg is laid and incubated by both adults for 26-31 days. Chicks are precocial and hatch with a gray down covering and grayish-pink beaks and legs. After a week, young flamingos form groups, called crèches, in order to stay warm and safe while adults are away feeding. These groups have been observed numbering up to 30,000 individuals. The young and are fed until approximately three months of age. Flamingos do not breed until they lose their gray juvenile color at about two to three years of age.

Chilean flamingos are listed as near threatened by the IUCN. All flamingo species are vulnerable to habitat change and exploitation. According to a 2010 census, about 300,000 individual Chilean flamingos survive in the wild today. These birds are threatened by unregulated egg collection, hunting, habitat loss due to water diversion and mining, as well as breeding site disturbances by tourist.