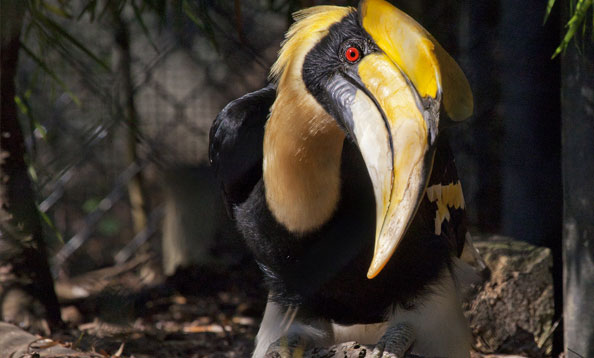 Our male hornbill was hatched at a zoo in Southern California. You can find him near Koala Crossing.

The great hornbill is among the world's largest hornbill species, weighing in at up to six pounds. Both male and female birds are primarily black with white necks. The wings have white bands while the white tail is barred with black bands. Males have red eyes surrounded by black skin, while females have white eyes surrounded by red skin. Great hornbills have a gland near their tail that secrets a yellowish-orange oil. When birds groom themselves they spread the oil over their feathers and head, giving each bird a unique coloration.

These hornbills are known for their large curved bill that is topped with a distinct enlargement called a casque. They may take up to six years to completely form, and are made from the same material which covers the outside of the jaw. In the majority of hornbill species, the casque is hollow with a honeycomb structure inside for support. The male's casque is larger than the female's.

Most hornbills are strong in flight, and the sound of air passing between the feathers in their wings can be very loud. Since each hornbill species give different flight noises, some biologists believe that hornbills use the sound of their flight to communicate with one another, signaling their arrival or departure to other birds.

Great hornbills are found in southeast Asia, including parts of India, China, Myanmar, Vietnam and south to the Malay Peninsula. They prefer tall trees in moist evergreen forests.

The majority of this species’ diet consists of fruit but they will also occasionally eat insects, small reptiles, amphibians, other birds and small mammals. At the zoo, they are fed fruit and insects.

Great hornbills are monogamous and usually found in pairs, although large groups of birds will feed together. Hornbills are territorial and will actively defend their range and nest.

Breeding season is from February to May; during this time, males compete for female attention by bumping casques and pairs perform call-and-answer duets. Great hornbills produce very loud vocalizations that sound like cackling and roaring, they are especially noisy when roosting.

This species has a unique nesting method. The pair finds a hollowed area in a tree and the female seals herself in using mud, bits of bark, fruit pulp and feces. Females stay inside the nest to incubate one or two eggs for 38-40 days. The male feeds her though a tiny opening in the wall. About five weeks after chicks hatch the female leaves the nest and the chicks seal themselves back in, with parents returning to feed them throughout the day. Young leave the nest after another two weeks and are independent around 15 weeks.