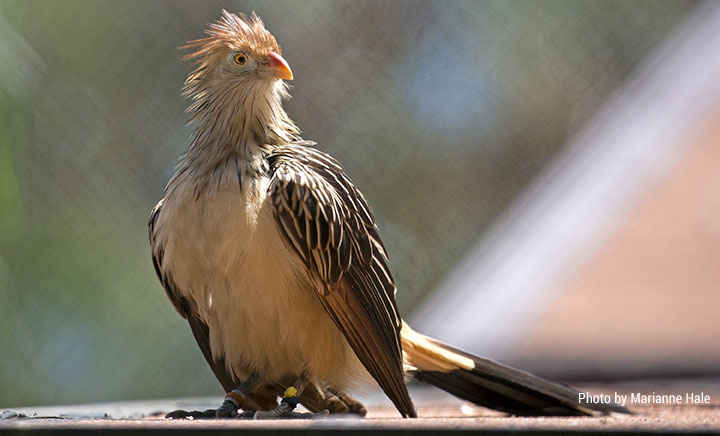 You can find one Guira cuckoo in the Lion House; the other is located in the aviary next to Komodo Alley.

Male and female guira cuckoos are similar in appearance. They weigh about 5 ounces and are approximately 14 inches in length. They have a scruff appearance with brown and white feathers on their backs and tails, a white breast, and an orange feather crest. The bill is yellow-orange and the feet bluish-gray.

They feed on insects, amphibians, eggs, and chicks of smaller species.

Guira cuckoos live in flocks of 6 – 18 birds. They have a noisy raucous call which they will use to claim territory, defend against other flocks, and court females. Courtship also involves feather displays. Nests are made of a platform of sticks and are located high up in a thorny tree. They can be reused from year to year. Eggs are incubated for 12 – 15 days and chicks fledge after another 12 – 15 days. Parental care continues for 3 weeks after fledging. Guira cuckoos participate in communal nesting in which eggs from multiple females are laid in the same nest.