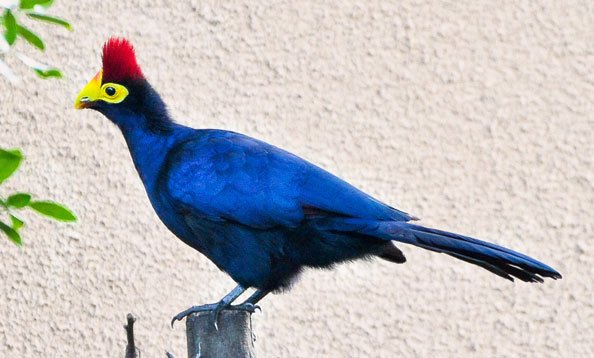 Our Lady Ross's turaco share an exhibit with the squirrel monkeys in the Doelger Primate Discovery Center.

Ross’s turacos are the second largest turaco species. They are medium-sized, weighing around a pound and 15-18 inches in length. Short, rounded wings make these birds weak flyers but their long tail helps with balance as they hop from branch to branch. Turaco feet are also well adapted for life in trees; their fourth toe can rotate forward or backward to get a better grip.

Their plumage is mostly indigo-blue with the exception of bright red primary feathers and a two inch crest. The short, yellow bill extends to the forehead to create a shield-looking structure. Vivid yellow skin also surrounds the eyes. Juveniles lack this yellow coloration around the bill and eyes and are generally duller in color overall.

Lady Ross's Turacos are found in dense lowland and mountain forests of central and southern Africa. They prefer the canopy level of such forests and are agile climbers.

These birds are very social, living either in small family groups or larger flocks of up to 30 individuals. Groups tend to forage together during the day but roost on their own. Pairs are monogamous and territorial, aggressively defending their home range from other turacos and even predatory raptors.

Both males and females help to build a platform nest made of sticks and twigs. A clutch usually consists of two eggs which are incubated for 21-24 days by both parents. After chicks hatch other members of the flock help to bring food to the nest. Young turacos begin exploring the trees surrounding the nest well before they fledge at around 28 days.

The Lady Ross’s Turaco is listed as least concern by the IUCN. They are common throughout their range and have a large, stable population.