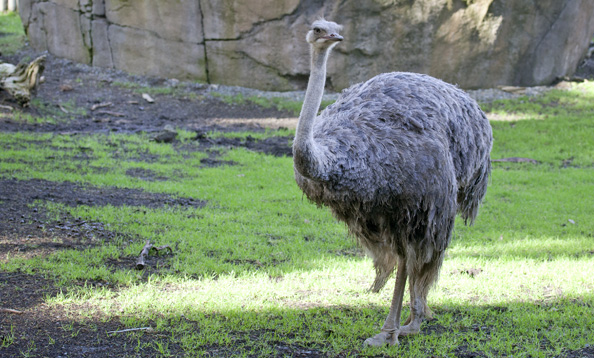 You can find our ostriches roaming the Leanne B. Roberts African Savanna exhibit.

The ostrich is one of the world’s most recognizable species. These massive animals are the largest living bird, weighing up to 300 pounds and standing as tall as eight feet. They have two forward-facing toes on each foot, and long legs that are bare of feathers. Their powerful legs make them capable of running up to 40 miles per hour, an important adaptation for a flightless bird. The head is small, with large eyes and a short, flat bill.

Females are a dull gray-brown, while males are black with a white tail and wings. As with other flightless birds, the feathers appear loose and shaggy. The long neck is usually grayish, but turns pinkish in males during breeding season. Juveniles are light brown with dark stripes and speckles, which aid in camouflage.

Ostriches can be found in sub-Saharan Africa and southern Africa. They prefer semi-arid deserts, savanna, open woodlands, and some regions with low brush and thorn trees.

They primarily feed on seeds, fruit, insects, and leaves but have been known to eat small reptiles and carrion. The ostrich will also swallow anything from stones, to coins and broken glass. At the zoo, the ostriches are fed a commercially-prepared pellet diet, as well as fresh produce.

Ostriches usually travel in small flocks of five or six, but are also seen in groups of up to 50 members. They engage in a symbiotic relationship with herd mammals; the hoofstock stir up insects for ostrich to eat while the ostrich help alert the herd of danger due to their height and keen sense of vision.

Males defend their territories in the breeding season by patrolling, displaying to chase out intruders, and by booming. Their call is surprisingly loud and deep, and is accompanied by inflation of the brightly colored neck skin. Their aggressive display consists of repeated flicking of wings, and postures with both wings raised. Breeding males display dramatically to females by laying down, waving their huge spread wings alternately.

The timing and structure of breeding season varies based on the availability of food and location. Sometimes monogamous pairs form, while in other locations one male and several females will gather in breeding groups. In these groups there is typically one dominant female which incubates the nest and lays most of the eggs. Other females in the group may lay eggs in the communal nest or in smaller nests of their own. The dominant female lays her eggs in the middle of a shallow depression while other females lay around the edges. One nest can hold as many as 60 eggs, although only around 20 can be covered by the brooding couple. Males incubate the nest during the night while the dominant female incubates during the day; chicks hatch after 42-46 days.

Ostrich are listed as least concern by the IUCN. Their population fell drastically in the 19th century due to the plume trade. Until the early 20th century they had a much larger range that included north Africa and the Middle East. Today the ostrich is primarily threatened by habitat loss.

In 2005, the Association of Zoos and Aquariums partnered with the Sahara Conservation Fund in order to help conserve the Saharan subspecies of the ostrich; ostriches raised in captivity have been released back to the wild in parts of their historic range in Niger’s Air Mountains.