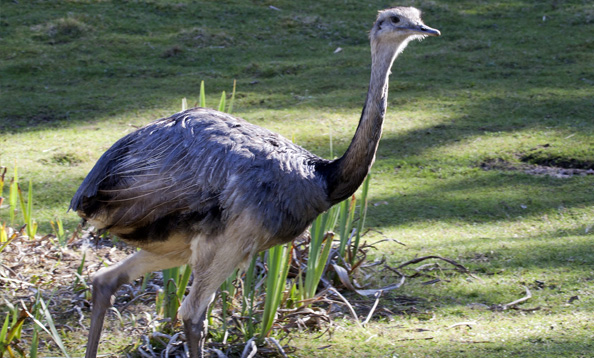 Our rheas can be found in the mixed species Puente al Sur exhibit.

Rheas are large, flightless birds that can grow to nearly five feet and weigh over 50 pounds. Like ostrich and emu, they have a long neck, powerful legs and strong toes. Feathers hang loose giving the birds a shaggy appearance. Both males and females have gray-brown plumage and black around the neck. Males tend to be larger and have a darker coloration around the neck and back. Chicks are grey with dark stripes.

They eat leaves, roots, fruit, seeds, as well as insects, small mammals and reptiles. At the zoo, they are fed a ratite pellet diet and fresh greens.

Throughout most of the year, rheas are social and form flocks of between 10 and 100 birds. Prior to breeding season, which lasts from August to January, females break into small groups while males claim and defend a territory. Male rheas perform courtship displays involving booming calls and wing shaking in an attempt to attract females.

Unlike most animals on Earth, rheas engage in almost exclusive paternal care. Nests are created by males and consist of a simple shallow depression that is lined with vegetation. Several females will lay eggs in each male’s nest, which can result in up to 30 eggs in a single nest. Afterward, females typically venture off to find another mate and lay more eggs, leaving the male to incubate alone. Chicks hatch after 35-40 days and are cared for by the male for 4-6 months. Juveniles are often seen in groups for up to 2 years.

Greater rhea are listed as near threatened by the IUCN. Major threats include hunting for meat, feathers and eggs as well as habitat loss. Additionally, they are persecuted by farmers due to their habit of eating crops.