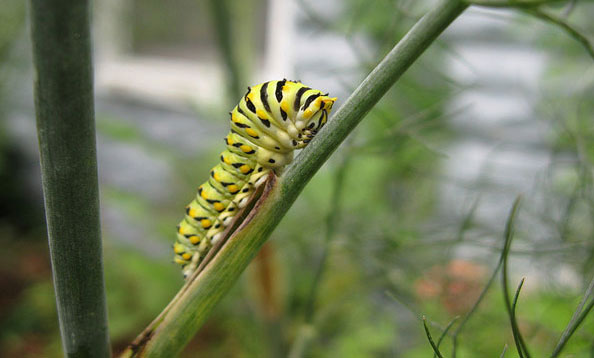 The caterpillar grows to around 5 cm in length before forming a chrysalis, which is brown or green and about 3 cm long. In the first two development stages, the caterpillar is dark brown, almost black, with an irregular white band at its middle. After that, it becomes more green at each successive molt until, in the fifth (last) stage, it is predominantly green, with markings in black, orange, and light blue.

Often found in Western North America in proximity of foodplant; hilltops on the higher peaks, and gardens.
Its major food plants are members of the carrot family, Apiaceae, (including fennel), and also some members of the citrus family, Rutaceae.

If disturbed, it will suddenly evert bright orange osmeteria (or "stinkhorns") from just behind its head, glandular structures which give off a foul odor.

These caterpillars are common and are not endangered.

The Anise Swallowtail Caterpillars can be found in the Insect Zoo.