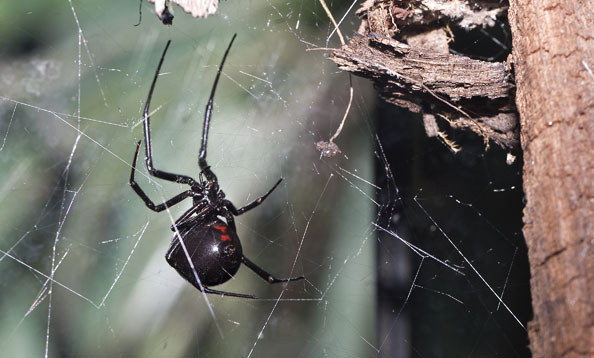 Females (3.5 cm and 25g) are black with large round abdomens while males (1.25 cm) are usually light yellow red or brown on abdomen and have longer legs. The hour glass is usually red but not always visible.

Chelicerates, fangs are perpendicular to body line. Duct from a poison gland opens from the base of each fang. The mouth and jaw are on the underside of the head. The body is supported by 8 long narrow legs.

It is found in Western TX, OK and Kansas City north to Canada and west to the Pac. Coast. Usually in tropical timber and arid zones.

In the wild, they can eat any small creature that the web can hold. At the Zoo, they are fed one cricket a week.

These spiders are shy and nocturnal, and usually stay hidden inside of the web unless frightened. The belly is always facing the upward position.

Western black widow spiders spin webs that do not take on a definite shape or form. The webs vary in location, but more so in appearance. The silk that creates the web is made up of a liquid from the large abdominal glands.

The black widow spider is common and not endangered.

The black widow spider can be found at the Insect Zoo.