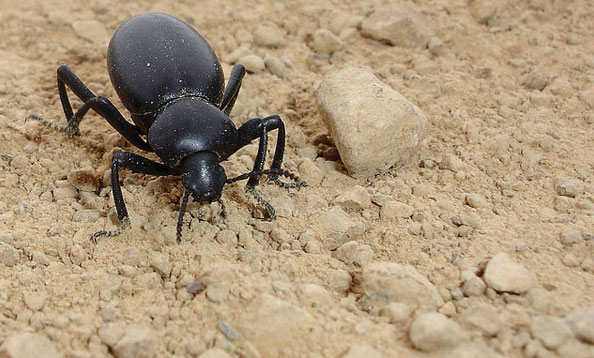 The forewing (elytra) are fused so this beetle is flightless. They have chewing mouthparts and adults have a hard exoskeleton, smooth and black and are a little over an inch long. Antennae are thread-like, but some species’ are slightly enlarged at the terminal end and appear club-like. Complete metamorphosis with the egg laid in soil, the pupa under soil and the adult will live 3-15 years. The larvae are slender, cylindrical, light brown and worm-like, but with six legs; similar looking to a commercial mealworm. The larval stage may molt 9-20 times. Unable to tell males from females without a microscope and dissection.

The Darkling beetle live in Western U.S. from Arizona to California. 100 species in this genus in California. Common in many habitats but especially adapted to arid regions. They are general feeders and scavengers, and are ground-dwelling nocturnal beetles. Normally they are found under rocks and logs during the day. In the wild, they eat decaying plant matter. And at the Zoo, they are fed Apple, monkey chow, and lettuce.

When disturbed, some beetles (genus Eleodes) assume a defensive posture in which they stand on their head and release chemicals from a scent gland in the rear that produces noxious odors and turns skin brown.

Darkling Beetles are common and not endangered.

Darkling beetles can be found at the Insect Zoo.