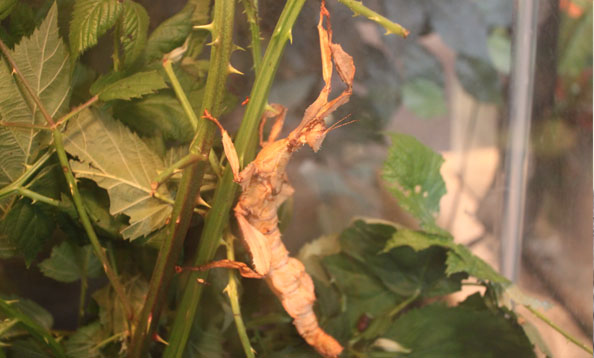 Female adult are covered with thorn-like spikes for defense and camouflage. Their long, rounded bodies grow to about 8 inches (20 cm) long. The males are small and thinner, growing only about 11 cm in length and have three ocelli. Males lack the thorny growths except for spikes around their heads. They have long wings and are good flyers who readily take to the air if disturbed or in search of females.

Walking sticks are found in Australia's tropical forested regions. In the wild they will eat certain species of eucalyptus.

Both genders, when threatened, stand on the front and middle legs, pointing their abdomen up or to the side in a sort of "scorpion" pose. They fold back their legs to defend themselves if anything comes in contact with their abdomen.

Australian walkingsticks are not endangered.