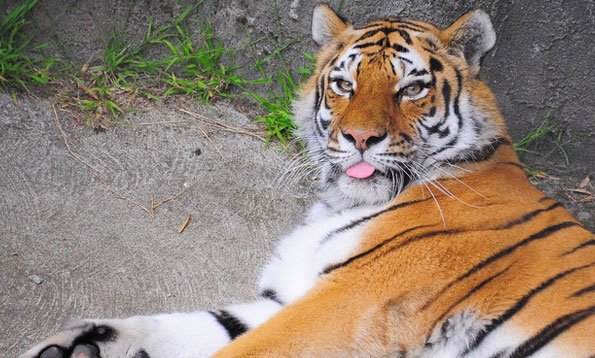 You can find our Amur tigers in the big cat grottos in Cat Corner. Since tigers are solitary cats, our male and female Amur tigers live in separate grottos but are frequently rotated to mimic range overlap.

The Amur tiger has the lightest colored coat of all the tiger subspecies, ranging from tannish-yellow to pale orange. Their fur is much thicker and longer than other tigers due to the cold climate of their home range. This particular subspecies also has fewer stripes, possibly to help camouflage the animal in the snow. Their undersides, insides of the limbs, patches above the eyes and cheeks are creamy white.

Male Amur tigers typically weigh between 400- 660 pounds, while females weigh around half that amount. Growing to over 9 feet in length, with 1 inch claws and canines that can reach 3 inches, Amur tigers are formidable predators.

Amur tigers typically live 8-10 years in the wild and 16-18 years in captivity.

These big cats are found in the Russian Far East near the Amur River, from which it gets its name. This area stretches north to south along the Sikhote-Alin mountain range. Small populations might also exist in northern China as well as North Korea. Amur tigers live in harsh environments where extremely cold temperatures and deep snow are common. Scrub and birch woodlands are preferable as they provide cover for hunting.

In the wild, their diet consists mostly of wild boar, ungulates like wapiti or moose and small prey like birds, fish, rabbits and mice. At the Zoo, tigers receive fortified horsemeat, rabbit and chicken.

Although solitary, tigers are not considered anti-social. They keep in contact by a variety of methods such as scent marking and scratches on trees and dirt. Tigers also use vocalizations such as roars, moans, or chuffs to communicate with other tigers.

They are primarily nocturnal but can be active during the day.

Females give birth every 3-4 years to a litter of 2-3 cubs after a 103-day gestation period. Cubs are altricial when born – they cannot see and are completely dependent on mother. They grow quickly, leaving the den around 2 months of age and joining the mother to hunt at around 6 months. Young tigers’ independence age varies from 18 months – 3 years old, at which time they establish their own territory. Females defend their territory from other females but a male might overlap several females’ territories.

The Amur tiger is listed as Endangered on the IUCN list and is on appendix I of CITES. In the 1940’s the Amur tiger was on the brink of extinction with approximately 40 tigers remaining in the wild. Loss of habitat, illegal hunting, and depletion of prey are major threats. Tigers require large home ranges and around 50-60 large kills a year to survive so they are particularly sensitive to habitat loss and human development. Poaching, however, is the single most immediate threat to tiger populations. Bones, teeth and claws are prized for use in traditional Chinese medicine while the demand for pelts is also high.

Due to vigorous anti-poaching and other conservation efforts in Russia supported by many partners, including WWF, the Amur tiger population has increased to around 500 and has remained stable throughout the last decade or so.