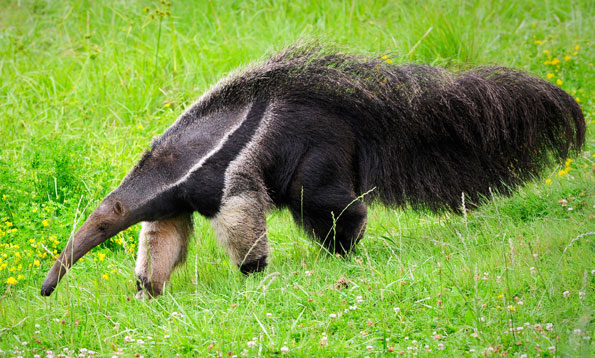 You can see our giant anteater at Puente al Sur, a multi-species exhibit located on the north side of the Zoo near the Little Puffer steam train depot.

The giant anteater is the largest of the four species of anteaters and differs greatly from the others in appearance. They measure between 40 and 52 inches from their snout to their rump; the tail adds another 26 to 36 inches. Smaller anteater species have short snouts and prehensile tails. The giant anteater has a long, elongated snout, as well as a diagonal black and white shoulder stripe and long, bushy tail. The coat is dense, coarse, and shaggy with long hairs, the longest of which are on the tail growing as long as 16 inches. The skin under the bushy tail is covered with scales.

Anteaters have poor eyesight and hearing but a very strong sense of smell, nearly forty times better than that of humans.

The forefeet have three very large claws and one smaller claw; the hind feet have five short claws. The sharp foreclaws are up to four inches long, and are used to tear open insect nests. The forearms and claws are so powerful that the giant anteater can rip open a termite mount or anthill with a single blow of its paw. The claws are also used for defense against predators like jaguars and pumas.

Life span for a wild giant anteater is 14 years; in captivity, they may live up to 26 years.

Giant anteaters are native to the swamps, grasslands and humid forests from southern Mexico to northern Argentina, and are members of the last living group of animals to have evolved in South America when it was an isolated island continent.

In the wild, giant anteaters are insectivorous, eating mainly insects (including ants, termites, beetles and larger insect larvae, and worms); they may occasionally dine on fruit, and satisfy their water needs by licking wet plants. At the Zoo, the anteaters are fed a diet of commercially-prepared insectivore kibble, occasional bananas or avocado, hard-boiled eggs, vitamins and a mineral mix.

Giant anteaters are generally solitary animals except during breeding season. Behavior can vary greatly throughout its range, usually nocturnal but more active during the day in some areas. They sleep up to 16 hours per day although they have no permanent resting place; preferring to use abandoned burrows where it curls up with its head between the forelegs, and its tail covering the body.

The female bears one infant after a gestation period of 190 days, giving birth standing up and waiting for the baby to climb up on her back. The baby clings to the fur on its mother’s back until it is almost half her size, then stays near her until she is pregnant again. The young animal does not completely feed itself until it is full grown at about two years.

Giant anteaters are listed as vulnerable by the IUCN. While they are widespread geographically, there are reports from many parts of their range that they have been locally exterminated. The anteater’s dietary specificity, low reproductive rate, large body size, and threats, in the form of encroachment by humans on their territory, throughout many parts of their range have proved to be significant factors in their decline.

The San Francisco Zoo participates in the Association of Zoos and Aquariums' coordinated Population Management Plan for giant anteaters.