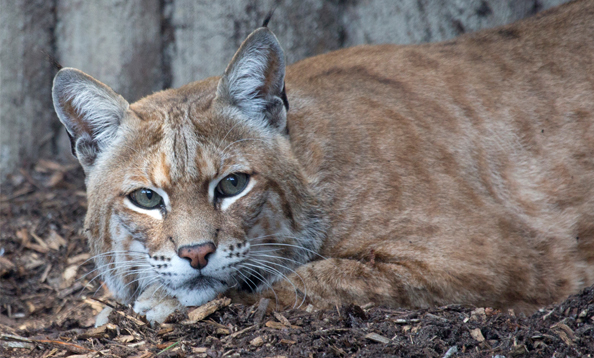 Click here to watch a video of our bobcat, Inti, interact with feeding enrichment in his exhibit! Enrichment provides our animals psychological and physical challenges that keep them active in their surroundings. The kibble and meatballs in Inti's feeder are loaded in different patterns, which keeps him checking back throughout the day!

The Zoo’s bobcat can be found next to the Lion House, across from the Snow Leopard.

The bobcat is named for its short, bobbed tail. They are medium-sized cats and are slightly smaller but similar in appearance to their cousin, the lynx. Bobcats have large ears usually tipped with black tufts and have ruffs of fur extending out from the jowls. Their coats vary in color from shades of beige to brown fur with spotted or lined markings in dark brown or black and a white underbelly. Bobcats are about 2 feet tall and weigh up to 28 pounds, females a bit smaller. Size varies greatly based on geographic distribution, with bobcats in the north being larger.

Bobcats are the most common and widely distributed wildcat in North America. They range from southern Canada to northern Mexico, including most of the continental United States.

The bobcat is an adaptable predator that inhabits wooded areas, as well as semi-desert, urban edges, forest edges and swampland environments. It persists in much of its original range and populations are healthy.

Though the bobcat prefers rabbits and hares, it will hunt anything from birds and small rodents to deer. Bobcats are fierce predators capable of taking prey up to ten times their own weight. Prey selection depends on location and habitat, season and abundance.

Throughout most of their range bobcats are crepuscular, but in more urban areas tend to be more nocturnal. Like most cats, the bobcat is territorial and largely solitary, although there is some overlap in home ranges. It uses several methods to mark its territorial boundaries, including claw marks and deposits of urine or feces.

Bobcats breed from February to April and produce one litter every year. A litter of 1-6 kittens is born after a gestation period of about 63 days. Kittens are reared in a secluded den such as a small cave, hollow log or brush pile. They begin to follow the mother after 3-5 months and will remain dependent until the next breeding season.

Bobcats are listed as least concern by the IUCN. Although they have been hunted extensively by humans, both for sport and fur, their population has proven resilient. Habitat loss is more likely to be a threat to bobcats in the future.