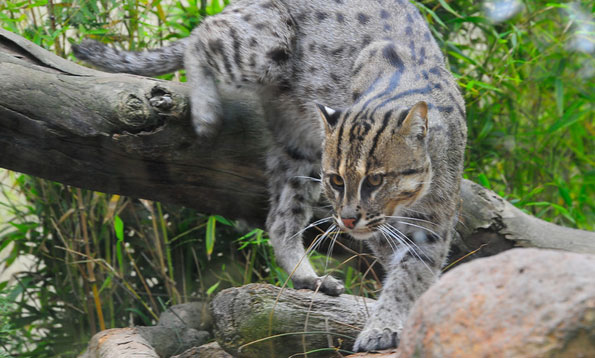 The Zoo’s fishing cats can be found in the in front of the Lion House, across from Penguin Island.

The fishing cat's body is stocky with relatively short legs and tail. Its fur is olive-grey with black stripes running down its neck and spots arranged in rows running along the body toward the tail. Legs and paws are spotted while the tail has nearly complete black rings. Their eyes are set closer together than other cats and the face has a distinctly flat-nosed appearance. The forepaws have toes joined by partial swimming membranes, which is surprisingly no more than other cats. The claw sheaths are too small to allow the claws to retract completely.

The size varies between locations. While Indian specimens grow to 32 inches plus a 12-inch tail, Indonesian fishing cats only reach 26 inches with a 10-inch tail. Indian individuals weigh up to 26 pounds, while in Indonesia adult fishing cats weigh approximately 13 pounds.

Lifespan is about 12 years in the wild, and about 15 years in captivity.

Fishing cats are found in scattered populations throughout southern and southeast Asia from Pakistan to Indonesia. They live in marshy thickets, mangrove swamps and dense cover along streams and up to 5,000 feet altitude in the Himalayas.

In the wild, these cats eat a diet made up largely of small mammals, birds, fish, crustaceans, mollusks, frogs and snakes.

Fishing cats are terrestrial and primarily nocturnal. Unfortunately due to their elusive nature little is known of their social behavior. They are believed to be solitary, but there have been some evidence that the males may help with the care and supervision of the young in captivity.

These cats can breed year-round although most births occur April through June. Litters of one-four kittens are born after a gestational period of 63 days. Kittens will be weaned at about six months and are independent at 10 months.

Fishing cats are listed as endangered by the IUCN. Their major threat is the destruction of wetland habitat. For example, in Sri Lanka it has been documented that a variety of factors are responsible for this loss, including land reclamation, dumping, clearing of the natural vegetation and pollution. Also, destructive fishing practices by humans greatly reduce the fish stock these cats require. They are also victims of poaching and threatened by loss of prey by overfishing.

What can you do to help fishing cats?