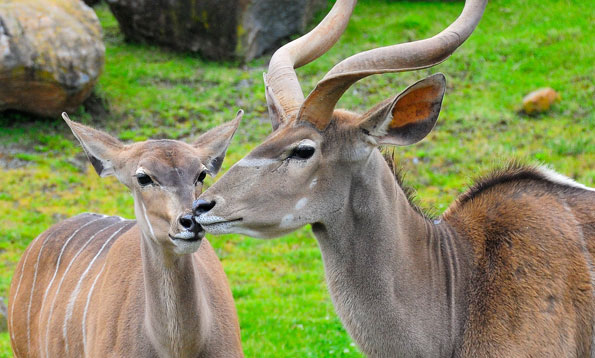 You can find our greater kudus roaming in the Leanne B. Roberts African Savanna exhibit.

Greater kudu are one of the tallest and most striking antelopes. Males can weigh up to 700 pounds and are adorned with spectacular long, spiraling horns and a beard. Females are noticeably smaller and will only occasionally have small horns. They have a reddish-brown coat but adult males are often grayish-brown. Both males and female have 6-10 white vertical stripes on the flanks, a white marking between the eyes, white cheek spots and a mane that runs from the neck down the entire back. When fleeing, kudu raise their tails and roll them forward so the white underside of the tail becomes visible.

Their large, sensitive ears and camouflage coloring help protect them from predators. If alarmed, they stand still and are difficult to spot. They are powerful swimmers and possess a keen sense of hearing.

Their range is southern and eastern Africa. The population is most dense in the south. In east Africa, the population is fragmented and many groups are isolated in the mountains.

Kudu are found in a variety of habitats including both sparse and dense forested areas as well as mountainous areas that provide bush and thicket cover for security. They remain in the deciduous woodlands during the rainy season, moving along the banks of rivers in the dry season where there is rich vegetation. To move easily through dense brush, they tilt their chins up and lay their horns against their backs.

Greater kudu are browsing herbivores, eating leaves, flowers, fruits, tubers and shoots from a variety of trees, bushes, grasses, herbs and vines. Their dentition is specialized for pulling and grinding.

Herds have home ranges of 1.5 to 4.5 miles but will roam more widely during the dry season if food is scarce. Females are quite social and form herds of up to 25 adults along with their offspring. Males generally live in bachelor herds of 2 to 10 individuals. Males and females only interact during mating season.

The male hierarchy is determined by age and size. Dominance is usually established quickly and peacefully by a display in which one male stands sideways in front of the other, making himself look as large as possible until the other yields. Rarely aggressive in the wild, kudu only fight with opponents of the same size and age. During such sparring contests, males slowly approach each other, lock horns, and push back and forth until one surrenders. These interactions rarely cause serious injury; though remains have been found where two combatants had locked horns and were unable to separate.

Mating is largely seasonal in southern Africa. Most births occur during the rainy season from February to June when grasses are high near the equator. Female kudu hide their single newborns away from the herd for roughly 4 weeks, visiting it only to nurse. The calf begins to accompany its mother for short periods and after about 4 months they permanently rejoin the herd. Young males remain with their mother’s herd until about 2 years of age.

Greater kudus are listed as least concern by the IUCN. Increasing human population, habitat loss and unregulated hunting are their greatest risks. Although this species can thrive in settled areas, they are threatened by deforestation due to agriculture and charcoal production. Kudu have also been hunted extensively for meat, hides and their highly prized horns which are used for musical instruments, containers, ritual objects and as a symbol of male potency. Additionally, kudu are highly susceptible to the rinderpest virus and other diseases. Despite these threats the wild population is estimated at about 482,000.