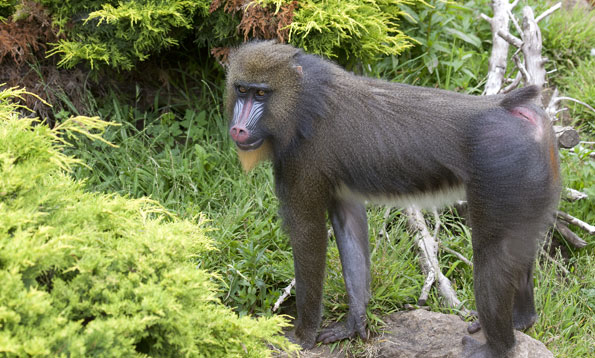 The Zoo’s troop of mandrills can be seen near the Thelma and Henry Doelger Primate Discovery Center.

Male mandrills are significantly larger than the females, weighing from 44-62 pounds, while females can weigh up to 25 pounds. This baboon has a stocky, powerful body and muscular arms. The overall coat is olive-brown with an irregularly barred pattern with a pale belly and chest. Mandrills have large cheek pouches that allow them to store food away for later.

The males’ massive heads appear too large for their bodies, and they have a blue to purple naked rump which is duller in females and juveniles. The male’s muzzle is large; the nose is bright red with blue, ridged swelling running lengthwise on either side. They also have white cheek whiskers, a yellow beard and a dark brown crest on the crown of the head. The females and juveniles are similar but duller because the bright red pigment is dependent upon adult male hormones. The blue coloring requires a similar hormone, but once established, it becomes structural and permanent.

In the wild, mandrills feed on fruits, roots, leaves, plants, seeds, nuts, fungi, snails, worms, herbs, insects and tubers. They may also eat the fruit of the oil palm and manioc obtained from nearby farmers. At the Zoo, the mandrills are fed a diet of fruits, vegetables, and monkey chow.

Much of the mandrills’ time is spent on the forest floor, but they do climb to the middle layer of trees to sleep. They organize into small family groups of one adult male, a harem of several adult females and their young. During the dry season, family groups may join to form larger troops of several hundred.

Mandrills are diurnal, roaming through their range and foraging for food during the day then climbing into trees to sleep at night.

Males are constantly on the alert for predators. If baring his teeth does not scare off an intruder, the adult male will work himself into a frenzy, jumping up and down. Bright red spots will appear on his wrists and ankles and his chest will turn a vivid blue. It is believed that this color change is produced by a specialized circulatory function.

When a female is ready to mate, her rump swells and the color intensifies acting as a signal to the group’s male. A single birth occurs after a gestational period of 167 - 176 days. Young cling to their mother’s belly initially then move to her back after a few months. Young reach independence at about 18 months, usually coinciding with mother’s next birth. Juvenile females will stay with the troop while males leave and remain solitary but will occasionally forage with the group.

Mandrills are listed as vulnerable by the IUCN. Intensive hunting pressure on this species, combined with habitat loss across its range, populations have seen a decline exceeding 30% over the past 30 years. As human settlements expand into mandrill habitat the demand for bushmeat increases. Due to the mandrills loud and social nature they are easy to locate, often resulting in large troops being destroyed very quickly.

They are listed on appendix I of CITES and found in several protected areas but more action is needed to end illegal logging and hunting.