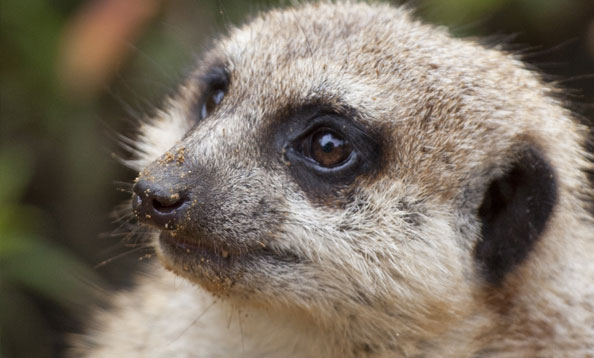 You can find the Zoo’s meerkats at the popular Meerkat and Prairie Dog exhibit, located in the Exploration Zone.

The meerkat area replicates an arid plain, complete with high termite mounds, and was created to give visitors a glimpse into the world of the slender-tailed meerkat. At the exhibit, you can test your digging skills with that of a meerkat by scouring a sandbox for hidden treats, just as a meerkat would do. You can also peer into a periscope and pretend you’re a meerkat sentry by trying to spot the predator.

Adult meerkats are about 20 inches long from head to tail, and can weigh about two pounds. Its eight-inch long bushy tail forms a tripod with the feet for better balance when standing upright. Their faces and bodies are long and they have short legs, with feet equipped with long claws adapted for digging.

They are light brownish-gray with broken dark brown bands across their backs and sides. Their bellies have dark skin and light fur, which together act as a “solar panel” to warm the animal. Meerkats sport dark markings around their eyes that act like built-in sunglasses, protecting them from the harsh desert sun. Meerkats are diurnal animals with sharp eyesight and good color vision, often seen staring into the bright sky to spot birds of prey.

Lifespan is about 10 years in the wild and up to 15 years in captivity.

Meerkats are omnivores, feeding mainly on insects, spiders and snails. However, their diet also includes rodents, ground-nesting birds and their eggs, lizards, bulbs, and roots of selected plants. With an acute sense of smell, meerkats can easily locate buried prey, sometimes digging as much as one foot in hard ground to unearth beetle larvae. At the Zoo, the meerkats are fed a diet of raw meat with vitamins and minerals, mealworms, crickets, fruits, vegetables, and dried dog kibble.

Meerkats are a dynamic and highly social species that live in close-knit colonies whose individuals can number as many as 50. Together they hunt, fight predators, raise their young and even sleep huddled in a heap.

These groups, called “mobs,” are broken down into clearly defined roles. These roles ensure the survival of the group as a whole. A “babysitter” stays close to the den and watches the young while the parents hunt or nap. “Hunter” is a role that all meerkats must play, as each animal is responsible for its own food, although parents bring food back to young pups. The “sentry” illustrates how meerkats, small and vulnerable, use their social natures to protect themselves against predators. The sentry scans for predators, standing up on their hind legs and barking out warnings if they hear, smell or see any predators, with a special call for different types of danger. “Teachers” go one-on-one with juveniles to show them how to hunt.

Meerkats live in underground burrows or utilize natural outcroppings as dens. They are active diggers, using their powerful forelegs to create burrows as deep as 10 feet. Meerkats are also known to share or take over burrows from other animals. Burrows are usually grass-lined and are sometimes shared with ground squirrels and yellow mongoose.

Colonies consists of one dominant male and a dominant female. These two are typically the only meerkats to breed throughout the year. Subordinate females are sometimes evicted from the group when the dominant female is about to give birth. Two to five pups are born in the burrow after a gestation period of 11 weeks. They emerge from the burrow at around four months and begin learning to forage. The young play much of the time, wrestling and nipping one another. Older siblings and parents groom, guard and play with the young. They are fully grown within a year. Males leave the group at about two years to establish their own group.

Meerkats are listed as least concern by the IUCN. They have no major threats at this time.