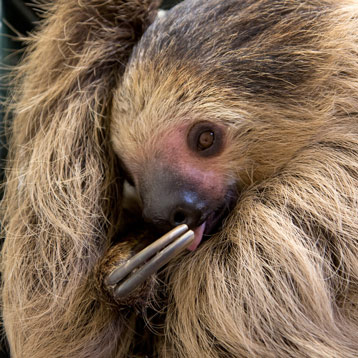 You can find our sloths in the South American Tropical Rainforest and Aviary.

Southern two-toed sloths are between 21 – 29 inches in length and weigh between 8 – 17 pounds. They have four long limbs with two toes on their front feet and three toes on their back feet. Their three to four inch curved claws help them hold onto branches as they move through the forest canopy. Their head is short and flat with a snub nose, small ears and large eyes. These sloths have long coarse fur with a dense and smooth undercoat that provides good insulation. The algae growing on their fur gives them a greenish hue, allowing them to blend in with their surroundings.

Their teeth grow continuously and are worn down by their leafy diet. They have a 10 inch long tongue that is covered with sharp, backward facing spines to help them to collect food. A slow metabolic rate allows them to survive on a diet that provides little nourishment; while their four-chambered stomach assists with breaking down plant matter.

Lifespan is up to 25 years in the wild and up to 30 years in captivity.

They feed on leaves, shoots, fruit and the occasional insect or small animals.

Southern two-toed sloths are primarily nocturnal and solitary animals. They spend nearly all their lives high in the canopy, only descending to the ground to move from tree to tree and to defecate. They are extremely clumsy on land but are surprisingly good swimmers. Sloths are the slowest mammal on the planet and will sleep from 15 to 20 hours a day.

Sloths can give birth every 16 months and mating occurs throughout the year, but usually peaks in March and April. They have a gestation period of 10 months and give birth to one offspring while hanging upside down. Young will cling to its mother’s belly for five weeks, although they will only nurse for about a month. Offspring remain with their mother for six months but sometimes up to two years.

Two-toed sloths are listed as least concern by the IUCN. However, they are threatened by habitat loss due to agriculture, logging, and human expansion. They are occasionally hunted for bushmeat but since local taboos exist about consuming sloths, hunting is not seen as a serious danger to their population.