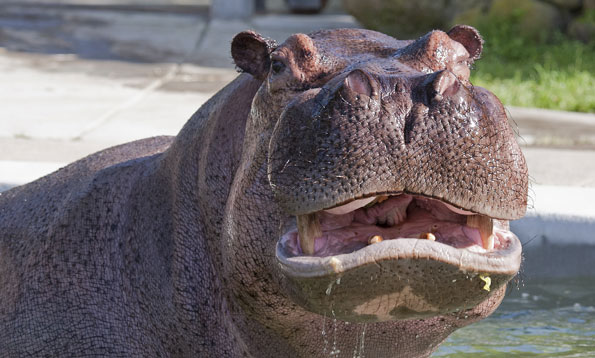 You can see our male hippo behind the Lion House, next to the black rhino habitat.

The hippopotamus is a huge, heavy animal with short legs and an enormous head, extremely broad muzzle and a short neck. The body is barrel shaped and the belly hangs low, just above the ground. As the third biggest land animal -smaller but heavier than a white rhino- hippos weigh over 4,000 pounds and are 12 feet in length and up to five feet tall at the shoulder. The mouth itself measures two feet across, with long tusk-like incisors and canines that grow continuously.

Ears, eyes and nostrils are located at the top of their head, allowing them to stay alert and breathe while almost completely submerged. Their ears and nostrils close automatically when the animal is under water for up to 5 minutes at a time.

They have practically no hair, and their smooth skin is quite delicate. It exudes a red, oily liquid that keeps the skin moist and protected when the animal is out of the water.

Lifespan is about 40 years in the wild, and over 50 under human care.

Nile hippopotamuses inhabit river areas with deep water and adjacent reed beds and grasslands of Africa, south of the Sahara and along the Nile. Their range once included Asia and large parts of Europe, however.

The hippopotamus is an herbivore, feeding on grass, fallen fruit and occasionally on cultivated crops such as sugar cane or corn. At the Zoo, the hippos are fed a diet of alfalfa, horse chow and vegetables.

Hippos are both aquatic and terrestrial. They spend most of the day in the water, but forage for food on land during the night, running to the water for safety if alarmed.

Bulls have a loud roar that can be heard over a great distance. They also have a cattle-like bellow accompanied by a wide open mouth that is used as a threat, or a horse-like neighing when alarmed.

A hippo herd consists of one adult male, 10-30 females and their young. Adult males compete for control of a herd and the territory it occupies. Fights between bulls are vicious and may last several hours. Their chief weapons are the large lower canines. Older high-ranking bulls form a bachelor group outside the nursery while young males live in outlying areas.

Generally, one 100-pound calf is born after a gestation period of 227 – 250 days. Mating and birth usually occur underwater, and the calf can nurse underwater. Young hippos are preyed upon by lions and crocodiles so a small group of females will often stay behind to protect calves while others graze. Weaning occurs at about eight months but a calf will remain with its mother for several years.

Hippos could be considered a keystone species, as their feces is deposited in water which nurtures abundant growth of the tiny plankton that feed fish. The fish, in turn, are fed upon by humans or other carnivores such as otters, crocodiles and several bird species.

They are currently listed as vulnerable by the IUCN. It has become rare in much of its range, but there are still large populations in the upper Nile Valley of East Africa. Hippos are hunted extensively for their highly prized flesh, their abundance of fat, their superior quality tusk ivory, and for their hide. They are also hunted for sport and killed by farmers for the damage they do to crops. In some areas where hippos are confined to certain parks they have become overpopulated, causing erosion and the disappearance of certain grasses. Habitat protection and hunting restrictions can help ensure a bright future for these large animals.