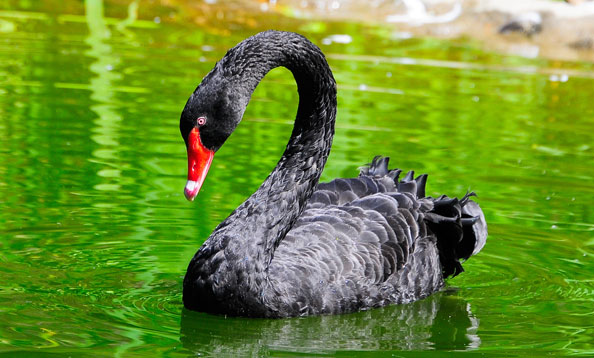 You can find the black swans at Puente al Sur, a multi-species exhibit located on the north side of the Zoo near the Little Puffer steam train depot.

They are large, almost entirely black birds with the longest neck of any swan compared to body size. Their characteristic black feathers are fringed with grey and ruffled on the wings. Primary and secondary feathers are bright white but only visible while the bird is in flight. They have black webbed feet and a red beak that is pale at the tip. During breeding season the normally white eyes turn red. The skin between the eyes and beak is red as well.

Young, called cygnets, have a fluffy grey plumage that becomes mottled brown after three or four weeks. The tips of juveniles’ flight feathers are black and they have dark beaks.

Lifespan is around 12 years in the wild, and up to 40 under human care.

Black swans are naturally found throughout southeast and southwest Australia and Tasmania. They have also been introduced to New Zealand, and ornamental ponds and lakes in western Europe, Japan and Singapore. They prefer shallow lakes, ponds, swamps during breeding season. During the rest of the year they are often found in brackish estuaries or saltwater lakes and coastal habitats.

They are primarily herbivorous, feeding on algae and a variety of aquatic plants. They are also known to graze on grasses near water, occasionally eating invertebrates in the process. At the zoo, they eat grain and chopped greens.

Black swans usually live in monogamous pairs that sometimes mate for life. However, these birds can form very large groups, especially during molting season when they are unable to fly. Juveniles tend to change partners often but once mature they mate for life.

They make a high-pitched call when in flight; although the male’s trumpet call is deeper than the female’s. Black swans also produce a softer cooing sound as well as a whistle when defending a nest.

Breeding season varies depending on the location but usually occurs in winter months. Nesting can take place anytime from February to September. Nests can reach five feet across and are constructed from twigs and reeds in the center of a lake or near banks. They are maintained, repaired and used year after year. The female lays four to nine grayish-green eggs that are incubated for 35-40 days. Chicks are able to fly at 150-170 days but will remain with parents for up to six months.

As with many waterfowl, adult black swans have a staggered molt with the female going first at the start of laying the clutch. As she regains her flight abilities the male will begin his molt and then regain his flight at the same time as the cygnets.

Black swans are listed as least concern by the IUCN. They are not globally threatened as their total population is estimated at between 100,000 and 1 million birds. There is an established hunting season in New Zealand in an effort to control the population and prevent crop damage.