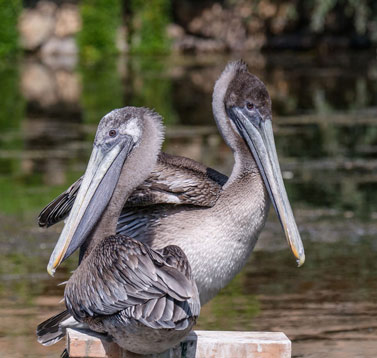 You can view our brown pelicans in the Lower Lake, across from the bears.

Brown pelicans are the smallest and have the darkest plumage of all pelicans. Their body is about 40-50 inches long with an average wing-span of 6.5 feet. Males are generally 15-20% larger than females. Like other pelicans, they have a long bill and large gular pouch used for catching fish. These pelicans have air-sacs in their body, allowing them to quickly bob back to the surface after a dive.

Adults have a grayish-brown wing and body feathers. Both the head and neck coloration undergo a transformation surrounding breeding season. The head becomes either yellow or white, and the neck takes on a white or dark brownish-black color. The gular pouch is typically grayish-green but during breeding season the base becomes bright red.

They have a long lifespan; the oldest recorded wild pelican lived to 43 years old.

These pelicans are found in shallow coastal waters, bays, estuaries, marshes and swamps. They have a large range including the east and west coast of the United States, through Central American into South America. They are strictly coastal birds, rarely going inland, and also avoiding the open ocean.

They feed on a variety of fish, such as anchovies, sardines, and herring, but will also eat shrimp, marine invertebrates and scraps discarded by fishermen. At the zoo, they eat a variety of fish.

Brown pelicans are often found in large colonies, especially during breeding season. They are seasonally monogamous and can be extremely territorial of their nesting sites. As diurnal birds they can be found roosting on predator-free islands, sandbars or offshore rocks.

Vocalizations are common in breeding colonies where birds tirelessly defend their territories. A low “hrraa hrraa” accompanied by head swaying serves as a warning to birds getting too close.

Breeding and nesting season are highly dependent on a number of environmental factors and thus differs across its range. Breeding generally occurs in late fall to early June and nesting follows shortly afterward. Nests are built on the ground in shallow depressions, in mangroves, cliffs or low trees. Males choose the nesting site and bring the female materials which she uses to line and create the nest. After laying 2-3 eggs, brown pelicans use their large, webbed feet to incubate the eggs for 28-30 days. Both the male and female incubate the nest and feed chicks after they hatch. Young will often leave the nest around five weeks and form small groups. Chicks fledge and are independent around 12 weeks.

Brown pelicans are listed as least concern by the IUCN. During the 1960’s and ’70s there was a severe population decline due to the pesticide DDT, but its ban has allowed the North American populations to recover. They were first declared endangered in 1970 but were removed from the list in 2009. Today, threats include human disturbances of nesting sites, entanglement in hooks and fishing line, oil spills, and hunting.