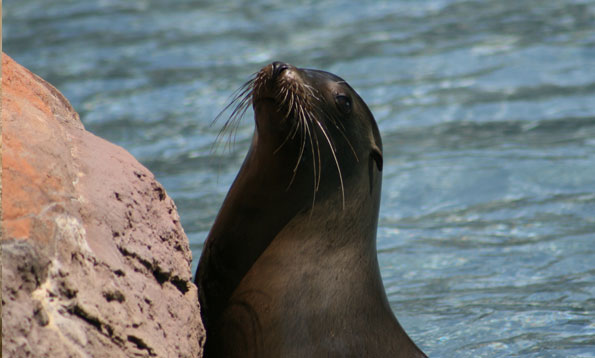 In 2020, we sadly lost both of our rescued sea lions, Silent Knight and Henry. Both were blinded from injury and disease in the wild and could not survive on their own. They were rescued by The Marine Mammal Center and found a second chance at life here at the San Francisco Zoo & Gardens since 2011.

The easiest way to tell seals and sea lions apart are by their ears and their flippers. Sea lions have an external ear flap and seals do not. Sea lions also have large front flippers and rotating rear flippers, allowing them to walk on land.

California sea lions have a great degree of sexual dimorphism. Males have dark brown fur and can weigh up to 850 pounds while females are slightly lighter in color and only grow to reach about 220 pounds. Mature males also develop a large bony bump on the top of their head called a sagittal crest. Sea lions have a long, dog-like snout covered in sensitive whiskers that help them find prey in murky water.

Lifespan in the wild is 15-24 years, and longer under human care.

The California sea lion are found in coastal waters from Baja California to British Colombia including bays, harbors, and river mouths as well as several islands far offshore in deeper waters.

They eat a wide variety of prey, such as fish, squid and sometimes clams. At the Zoo, they are fed fish.

California sea lions are highly social, and are well known for their dog-like barks. They are very vocal particularly during the breeding season. Adult males make deep, loud barks repeatedly when establishing territories. After that, the males are mostly quiet unless their territorial boundaries have been violated by a rival. Barking may also attract mates. Female sea lions emit a unique vocalization when calling their pups, and the pups themselves will bleat and make a high pitched alarm call. Juveniles and young adults of both sexes will make high-pitched barks when alarmed.

Breeding occurs from May to June. During this time dominant males establish territories and juvenile males are forced into bachelor groups nearby. Females usually give birth to one pup in June or July and are ready to breed again in about 28 days. Pups are born with blackish-brown fur that lightens after about a month. Females stay with their pup for the first week after birth then begin alternating between days at sea and suckling on land. Pups are weaned between 10-12 months.

Most sea lions found in man-made environments are males or juveniles, because sea lions do not breed in these areas and females tend to stay near breeding islands and beaches.

California sea lions are listed as least concern by the IUCN. In the 19th and early 20th century they were hunted extensively but today number approximately 238,000 due to the passage of the Marine Mammal Protection Act of 1972. Current threats include human conflict, entanglement in fishing nets, climate change, and pollution.