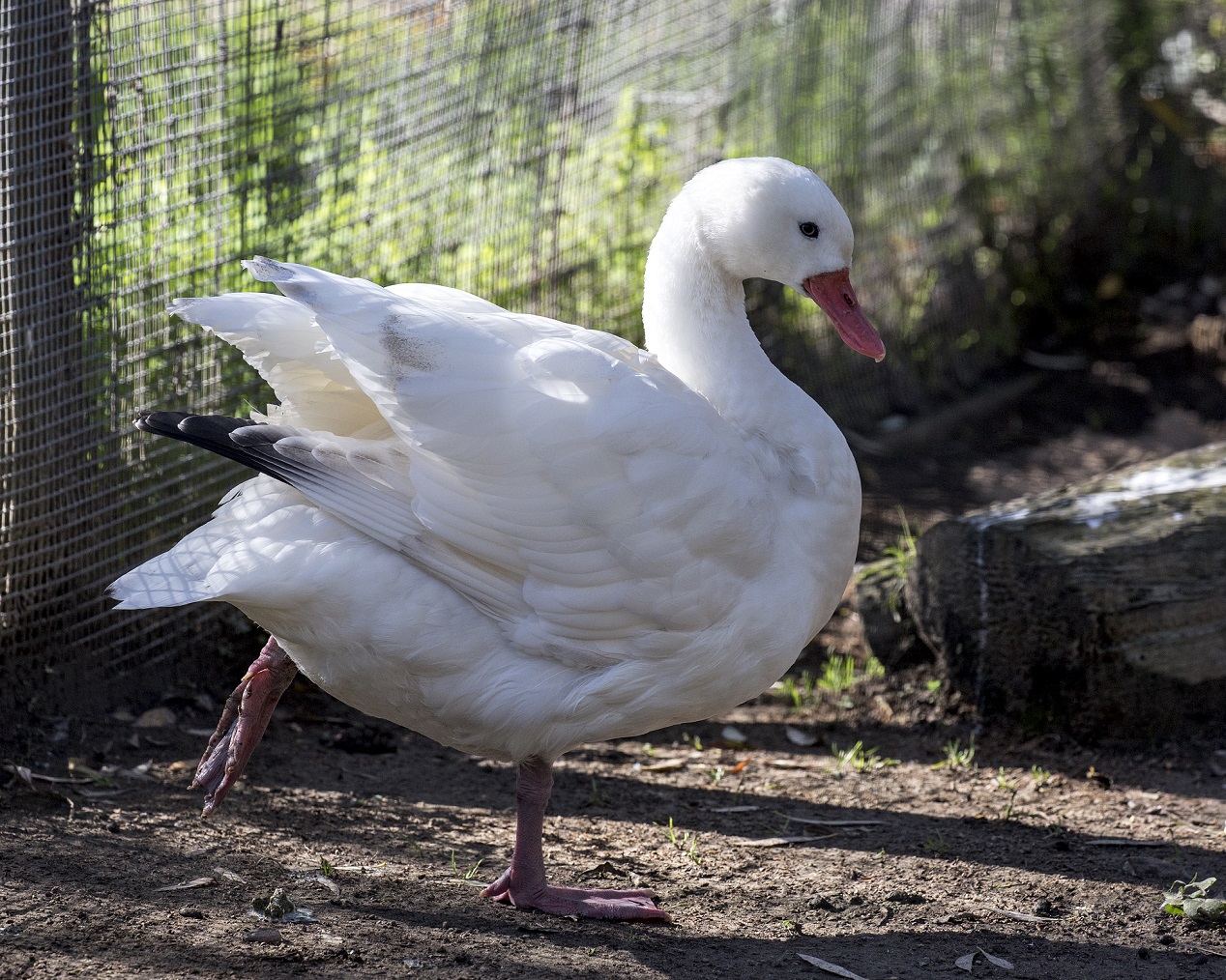 You can find the our Coscoroba Swans swimming near the penguins on Penguin Island.

Male coscoroba swans are slightly bigger than females, being heavier, longer, and having a wider wingspan. Males weigh between 8.5 – 12 pounds and females between 7 – 10. They measure between 35 – 45 inches in length. Their feathers are all white, with the exception of six black-tipped feathers at the tips of their wings. The bill, legs and feet are all bright reddish pinkish. Cygnets are black and grey with stripes and resemble juvenile whistling ducks. Coscoroba swans spend much of their time preening their feathers to keep them waterproof by cleaning them and reapplying oil from a gland at the base of the tail. Mutual preening reinforces pair bonds. They also have special chambers in their throat which loudly projects their call, like a trumpet. They have both alarm calls and contact calls.

They live in southern South America, including parts of Chile, Argentina, Uruguay, Paraguay and Brazil. These birds are found near freshwater swamps, lagoons and ponds, near cover of vegetation.

They eat aquatic vegetation, small aquatic invertebrates, and fish spawn. They also will sometimes graze on land for grasses and plants.

Coscoroba swans are primarily monogamous. A single pair will make a nest mound out of vegetation near the edge of the water. Between 4 – 7 eggs will be laid, which the female will incubate for approximately 35 days. Males will defend the territory around the nest. Both parents will help raise the cygnets who will fledge after 3 – 4 months. Juveniles take 8 months to reach adult size. Eighty percent of cygnets do not survive their first year. After the breeding season, coscoroba swans will molt and will gather together for protection while they are flightless. The average lifespan in the wild is 7 years, but they can live up to 35 years in captivity. Flock size can fluctuate from a few dozen to hundreds and in their migratory range they will migrate in large flocks, calling loudly to each other to stay in contact and flying at high altitudes to take advantage of air currents.

IUCN – Least Concern. Threats to these birds include habitat loss, such as draining of wetlands, collision with manmade objects and avian influenza.