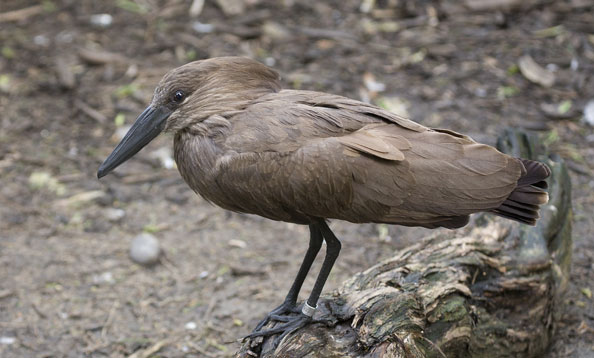 They are primarily brown with a subtle purple sheen on the back. A thick crest of feathers extends past the back of the head and exaggerates the anvil silhouette. They have short legs compared to other wading birds and partially webbed feet. Hamerkop have a wingspan of up to 37 inches and are strong flyers. Juveniles are similar to adults in coloration; chicks have grey down and broad, blunt bills.

Lifespan is about 20 years.

They are found in diverse range of habitats including savanna, woodland and wetlands in sub-Saharan Africa and the island of Madagascar. These birds are found in many semi-arid regions but tend to prefer areas with permanent sources of water.

Primarily hunting in aquatic habitats, hamerkops eat fish, crustaceans, amphibians and insects. They stalk their prey by wading through shallow water and striking forward with their bill. They may also probe in mud to catch invertebrates. At the zoo, they eat mice and fish.

Hamerkops are diurnal but occasionally active at dawn and dusk. These birds are territorial and inhabit well-defined ranges. They are usually found in pairs but can sometimes assemble in large groups of up to 50, although 10 individuals is more common. Quiet when alone, but gregarious in groups, hamerkops emit a wide range of vocalizations, consisting of cackles and a shrill flight call of “wek-wek-wek.”

Breeding season occurs year round throughout most of their range but peaks in late rainy season in some areas. Mating occurs during the building phase or once the pair’s nest is complete, but mating displays are common before this time. Hamerkops engage in a ceremony called “false mounting” where crests are raised, wings fluttered and a chorus of cries continues for several minutes as each bird hops on to the other’s back without actually mating.

Their massive nests are built in the fork of a tree, typically over water. The roofed structure is made of around 10,000 sticks, grass and mud. It is domed with a hollow chamber connecting to the outside by a small opening at the bottom, which leads to a tunnel up to two feet long. The opening is plastered with mud. The nest can take up to 6 weeks to construct and is worked on by the male and female. They are structurally sound and will support the weight of a man. They are decorated on the outside with brightly-colored objects such as crockery, bones, cloth and other unusual materials.

Both males and females incubate 3-7 eggs for approximately 30 days. Chicks fledge at about 7 weeks and are independent around a month later. Due to the abundance of predators that often share the nest, few chicks survive to adulthood.

Hamerkops are listed as least concern by the IUCN. They are locally abundant in their African range, widespread and locally common in Madagascar; a recent census indicates that their global population may be as high as 1,100,000 individuals. Their numbers are increasing, probably due to creation of artificial wetlands, however they may suffer from the deterioration of water quality due to excessive use of pesticides.