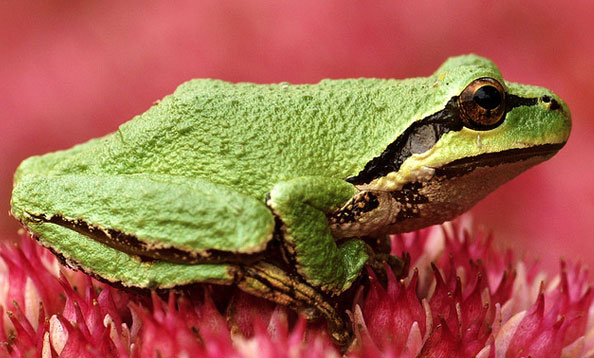 The Pacific Chorus Frog is a small treefrog with a large head, large eyes, a slim waist, round pads on the toe tips, limited webbing between the toes, and a dark mark that goes from their nostrils to their shoulders and looks like a mask. Their legs are long and slender. Their skin is smooth and moist. Colors range from bright green to brown, reddish, or gray. The body color and the dark eye stripe do not change, but the body color can quickly change from dark to light, and dark markings on the back and legs can vary in intensity or disappear in response to environmental conditions. The underside is creamy with yellow underneath the back legs. Some have dark stripes and spots on their backs. The male’s throat is darkened and wrinkled.

Typical of most frogs, prey is located by vision, then the frog lunges with a large sticky tongue to catch the prey and bring it into the mouth to eat. These frogsʼ toes are only slightly webbed and have sticky pads on the tips of their toes. The pads allow them to climb plants in search of insects and spiders.

This frog is found in Western North America from Southern British Columbia south to Baja, California and as far east as Nevada. They live in forests, mountains, and grasslands from sea level up to 10,000 feet as long as there is nearby cover and a water source from sea level to over 10,000 feet. They are mostly terrestrial, carnivorous, and nocturnal. They eat a variety of invertebrates.

The pacific chorus frog is the most commonly heard frog in its range. A group of calling males is known as a chorus. A dominant male, or chorus master, leads off the calling with a “rib-it” or “krekek”, which is then followed by subordinate males. The vocal sac, is a dark patch on the male that stretches out when the male is calling. Their throat sac can swell up to three times the size of their head in order to send their calls into the night. Aggressive encounters between adult male Pacific Chorus Frogs are common.

These frogs have the ability to change color from brown to green. These color changing morphs are triggered not by color change in their environment, but a change in background brightness. This type of environmental change would be caused by seasonal fluctuation. This species will hibernate during times of extreme hot or cold weather in moist shelters. Green body color absorbs more solar radiation, which can be more beneficial in cold and aquatic habitats. Brown body color absorbs less solar radiation, which may be more beneficial in drier, hotter, more terrestrial habitats.

While the pacific tree frog has remained abundant over most of its range, population-level declines have been observed in some areas. They are an important wetland species as the provide food for so many animals. Due to pollution, introduced species, habitat fragmentation, and destruction, Pacific chorus frogs have almost disappeared from San Francisco. In 2007, the San Francisco Zoo began working to reestablish a wild population on zoo grounds.

The Pacific Chorus Frog is temporarily on view in the Insect Zoo.