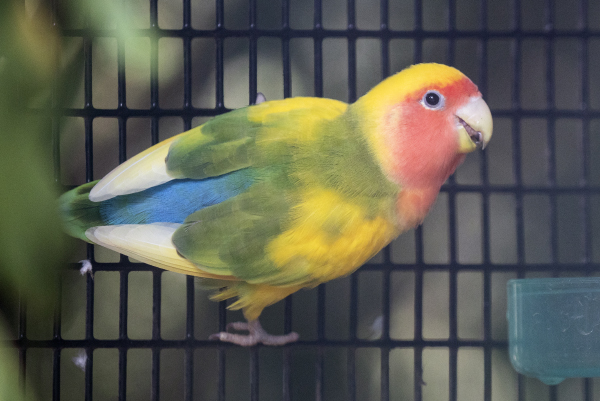 The rosy-faced lovebirds are near the Exploration Zone entrance; next to the prairie dog habitat.

The lovebird is a fairly small bird, about 5 inches long with an average wingspan of 4 inches. As their name implies, they have a rosy-peach coloration around the face and upper breast. The body is mostly green while the feathers covering the tail are bright blue. Several color variations exist in captivity but females tend to be duller overall.

The bill is horn colored, the iris is brown and the legs and feet are grey.

Lifespan is 15-30 years under human care; lifespan in the wild is unknown.

They are native to southwestern Africa, such as Namibia, Angola and South Africa. These lovebirds prefer arid habitats on the edges of deserts, sparse woodlands and mountainous regions. They are resilient but dependent on the presence of water.

Their diet mainly consists of seeds, grains, nuts and flowers. They are sometimes considered pests due to their habit of feeding on agricultural crops like millet.

These birds are very social, commonly found in groups of 5-20 but when food is abundant they congregate in flocks of 100 or more individuals. These large groups can be quite noisy, as lovebirds communicate through sharp, screeching vocalizations.

Breeding season tends to occur from February to May. Males and females engage in courtship rituals which include feather fluffing, head-bobbing and scratching. These lovebirds use communal nests made from bark, leaves and grass but will also utilize the abandoned nests from other bird species. Males will bring food to female while she incubates 4-6 eggs. Incubation lasts about 23 days and chicks fledge around 43 days. Young are independent at 2 months but may often return to the nest for another month or so.

Peach-faced lovebirds are listed as least concern by the IUCN. While the global population is unknown, it is thought to have decreased as the bird is popular among collectors. However, numbers may have increased in certain areas due to human creation of new water sources and the building of artificial structures which provide additional nesting sites.