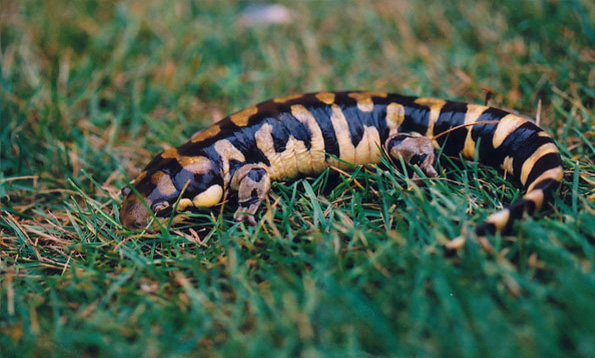 Tiger salamanders are large, stocky black with yellowish blotches or stripes, which are unique for each individual. Their color darkens with age. They have a short, rounded head, blunt snout, small protuberant eyes and thick necks, with sturdy legs, and long tails.

Tiger salamanders have a poisonous tail gland, which produces a toxic milky secretion for self-defense. They will curl up head and tail to display this gland as a warning. They also have specialized foot pads for burrowing.

Larvae are yellowish gray with broad caudal fins that extend well onto the back, broad flat heads, and bushy gills. They also have a whitish belly.

The tiger salamander is found in a wide range across North America, southern Canada, and eastern Mexico. They live in wetlands and grasslands with long-lasting vernal pools, which are free from predatory fish. In the wild, they eat earthworms and other invertebrates. At the Zoo, they are fed crickets and earthworms.

Adults live almost exclusively on land, entering the water only to breed. They spend most of their time underground, often in mammal burrows. They live in deep burrows, up to two feet. They are highly voracious predators, who emerge from their burrows at night. In the wild they can live 5-6 years, but in captivity they can reach 12-15 years.

Species is listed as Least Concern, but is under threat from collection for the introduced species and habitat loss. The subspecies California tiger salamander is Vulnerable and only found in California. The species is endangered in some states due to drought.

The Tiger Salamander is temporarily off exhibit but will soon be found in the Children’s Zoo.