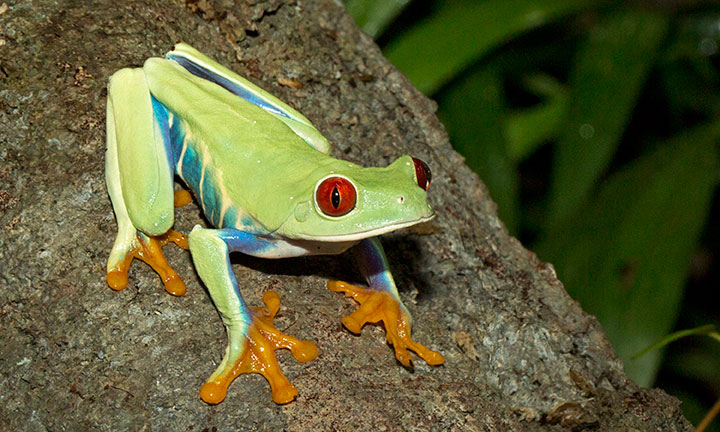 Males are smaller than females, with adult males reaching approximately 2 inches in length and adult females reaching 3 inches in length. Juveniles are brownish and change to bright green as the mature. Belly is light blue or cream colored, legs are blue and feet are red – orange. Eyes are bright red in adults. Toes have suction cups to help them adhere themselves to the undersides of leaves. They are excellent climbers and also can swim.

Red-eyed tree frogs are found in lowland tropical rainforests with high humidity and warm daytime and nighttime temperatures, often near a river or water source. They are found in southern Mexico south throughout Central America. They feed predominately on crickets, moths, flies and grasshoppers, but will eat other insects and even small frogs.

Red-eyed tree frogs reproduce during the rainy season. Males will croak to attract females and perform a “quivering” display to establish territory and intimidate other suitors. Males will clasp on to the back of the female in what is known as “amplexus” and fertilize the eggs that she lays. Mating takes place on the underside of a leaf hanging above a water source so that when the eggs hatch, the tadpoles will drop into water.