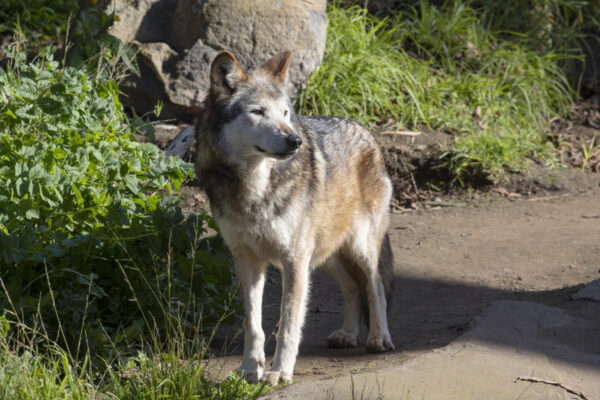 The Mexican gray wolf is located in Wolf Canyon, a spacious habitat located between the black bear and grizzly bear habitats.

Mexican gray wolves are the smallest gray wolf subspecies and are approximately half of the size of the North American gray wolf. They are between 26 – 32 inches at the shoulder, 4 ½ – 5 ½ feet in length from nose to tip of tail and weigh between 60 – 80 pounds. Males are slightly larger than females. Despite the name “gray” wolf, their coats are a mix of gray, rust, brown, black and cream. They tend to have darker colored backs and lighter colored bellies. They can live up to 15 years under human care.

Mexican gray wolves are found in mountain woodlands, grasslands and scrublands. They once ranged from the southwestern U.S. to central Mexico. Their current range is restricted to Apache National Forest in southeastern Arizona.

They eat mainly elk, white-tailed deer, and mule deer, as well as javelinas, rabbits, ground squirrels, and mice. They hunt cooperatively so that they can take out prey much larger than themselves. They will also occasionally scavenge.

Mexican gray wolves are social animals and live in packs, usually with an alpha breeding pair and their offspring. Mating season is between mid-February to mid-March and after a 63-day gestation period, a litter of 4 – 7 pups is born blind and helpless. The subordinates in the pack will help to raise the pups, who will become mature at 10 months of age. Wolves communicate through scent-marking, body language and vocalizations, including howling.