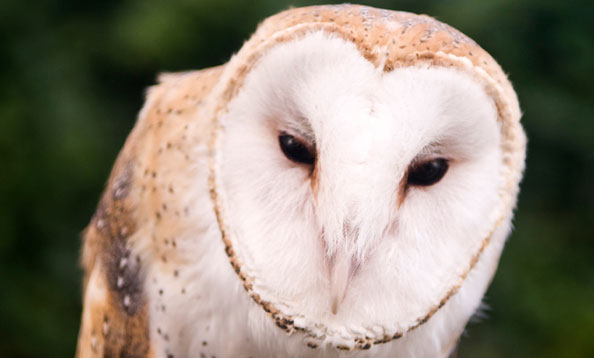 Our barn owl resides in the Koret Animal Resource Center.

They are a medium size, long-winged, long-legged owl with a short squarish tail. The upperparts are a light brown, golden, grey or buff color depending on the subspecies. Feathers are generally not patterned but can have a small amount of blackish-brown speckling. Underparts vary from white to light brown. The heart-shaped face is usually bright white.

Barn owls are one of the most widely distributed owls on the planet. They are found on every continent except Antarctica and can live in a wide range of habitats including forests, grasslands, deserts, marshes, and even urban areas. In fact, these owls get their name from their fondness for nesting in human-made structures, such as barns.

These birds are carnivores that feed primarily on voles, mice, rats, other small mammals, and occasionally frogs, insects and fish.

Like most owls, the barn owl is nocturnal, although it often becomes active shortly before dusk. Nests are usually located in hallow trees, caves or old buildings and are lined with regurgitated pellets and debris found nearby. Nests are sometimes reused and provide cover for roosting as well as brooding.

They will defend their nests but seem to be less concerned with their feeding sites, as several birds have been observed sharing a territory.

Barn owls are usually found in monogamous pairs and some mate for life. Males attract mates by using shrill courtship calls as well as several different flight displays. Three to six white eggs are laid in two-day intervals and are incubated by the female only for 30-34 days. During this time the male brings food to her, and to chicks once they hatch. Chicks are completely dependent on adults for 64-86 days. Fledging occurs around 55-65 days, although they will often remain in the nest for several weeks after. Pairs will typically have only one clutch per year but when food is plentiful they have been recorded hatching up to three.

Barn Owls are listed as least concern by the IUCN. They are relatively common throughout most of their range and a 2012 census reported that their population is at about five million adult individuals. Although they are not considered globally threatened, their numbers have been declining in parts of their rage primarily due to habitat loss. Pesticide use, prey depletion and traffic deaths are also threats.