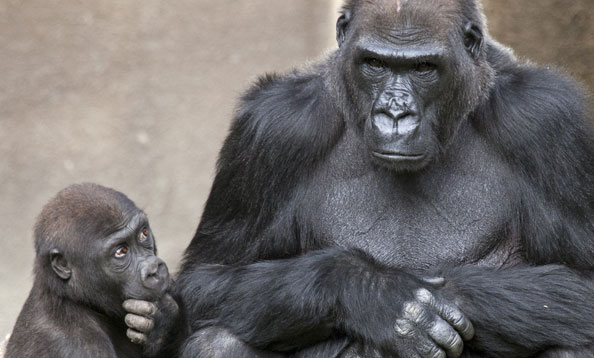 You can find the gorillas at the Jones Family Gorilla Preserve, a naturalistic exhibit featuring climbing rocks, tall trees and grass. The Zoo has one adult male silverback and four female western lowland gorillas.

Gorillas are the largest of the great apes; they stand up to six feet tall with an arm span of eight feet. They have muscular, stocky bodies and can weigh up to 400 pounds. This species shows a great degree of sexual dimorphism. Mature males, called silverbacks, have a silvery white saddle that appears around 12 – 14 years of age. These males also have a more distinct ridge above the eyes, larger canine teeth, and a large cone-shaped skull.

Lowland gorillas have fine brownish-black fur and often a reddish crown. Gorilla faces are bare, with a short muzzle, large nostrils, and small eyes and ears that lie close to the head. Their hands and feet are broad and strong, and they move about on all fours in a “knuckle-walk.” Gorillas and chimpanzees are the only animals to use the backs of their fingers like feet.

The lowland gorilla is found primarily in lowland tropical forests, particularly where there is dense ground-level vegetation, and in swamp forests. They are limited to small areas in Nigeria, Gabon, Equatorial Guinea, the Republic of Congo, Cameroon, and the Central African Republic.

In the wild, gorillas feed on fruit, roots, leaves, grasses, and insects. They play an important role in maintaining the health and diversity of forests by dispersing seeds in their feces. At the Zoo, their diet consists of much of the same food items such as fruit, vegetables, and leaves.

Despite their great size, gorillas are usually shy and passive animals. They live in family groups, called troops, of 5 to 30 individuals, with an average group size of about 11. Active during the day, gorillas spend most of their time foraging for food. The silverback, the leader of the group, is more of a benevolent dictator, and his authority is rarely challenged. The group may have several younger “blackback” males, and twice as many females as males.

Gorillas sleep in trees, usually a different one each night. The females and youngsters will build comfortable nests of leaves and branches, while the silverback will settle in at the foot of the tree to protect his family.

They use vocalizations, visual signals, and scents to communicate. Compared to other primates, gorillas are generally quiet. They have at least 25 recognized vocalizations, including: grunts, growls, whines, chuckles, hooting, and high pitched barks. The most recognized physical gesture is chest-beating, which is usually the result of a threat or challenge by another male. Dominant males also use a strong odor to communicate with other groups and maintain contact with his own troop.

Females start to breed around 10 years of age, while males do not start to breed before 15-20 years due to competition. Lowland gorillas have a gestation period of about 251 – 295 days, after which they give birth to a single young. Infants cling to their mothers’ belly but move to her back after about four months. They are weaned at 2 1/2 – 3 years but are cared for until about 4 years of age. Lowland gorillas have long intervals between births, usually 4-6 years; when also considering how late in life gorillas reach sexual maturity, it’s easy to see why they have slow population growth.

Gorillas are listed as critically endangered by the IUCN and on appendix I of CITES. Over the last 20 – 25 years gorilla numbers have declined by more than 60%. Their small, scattered populations are threatened by increasing human development that causes direct predation and habitat loss. Habitat destruction due to agriculture and logging has opened up forests previously inaccessible to humans. Consequently, gorillas are often hunted for bushmeat, body parts, and illegal pet trade. The Ebola virus is also a major threat and has the potential to eliminate the largest remaining populations of Western lowland gorillas.

What can you do to help gorillas?