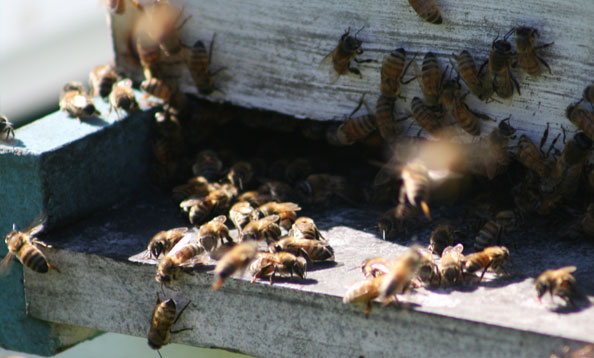 Honey bees have a bright color pattern. Like most insects, look at the world through compound eyes.

The western honey bee is native to the continents of Europe, Asia, and Africa. As of the early 1600s, the insect was introduced to North America, with subsequent introductions of other European subspecies two centuries later. Since then, they have spread throughout the Americas. They live off of flower nectar and honey.

In the wild, they create elaborate nests called hives containing up to 20,000 individuals during the summer months. They work together in a highly structured social order. Each bee belongs to one of three specialized groups called castes. The different castes are: queens, drones and workers.

Honey Bees are common and not endangered.

Honey bees can be found in the Children Zoo and in Greene’s Conservation Corner.