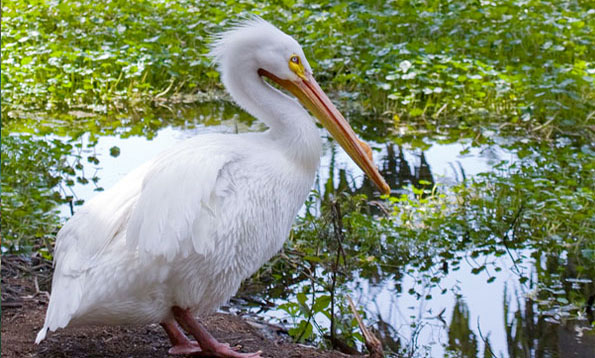 Our American white pelicans are found near Eagle Island across from Grizzly Gulch.

American white pelican is a very large bird, measuring about five feet, weighing 11-30 pounds with a wingspan of nearly nine feet. Their bill is long and flat with a pouch that can hold three gallons of water. Aptly named, their feathers are bright white, except for black primary and secondary feathers that are only seen during flight. The bill, legs and feet are pale orange.

Juvenile American white pelicans are much darker in color, primarily brownish with a pale grey bill and dark crest on top of the head.

Both male and females white pelicans exhibit physical changes during breeding season. Yellow feathers grow on their crown and chest. The skin around the eye, legs and feet turn a vivid red-orange and the birds grow a semi-circle “horn” near the end of the bill. These changes disappear by the fall molt.

These highly migratory birds are found in both inland and coastal areas of North and Central America. Summers are spent inland in scattered populations from British Colombia to Ontario and California to Minnesota. During winter they are found along the gulf coast from Florida to Mexico as well as the Pacific coast from central California to Central America. They prefer freshwater rivers, lakes, marshes and bogs as well as saltwater estuaries.

They primarily feed on fish such as minnows, trout, carp, and catfish, but are also known to eat crustaceans and amphibians. At the zoo their diet includes a variety of fish.

These pelicans are very social and usually found in large colonies. This is especially true during migration and breeding season, when colonies can reach up to several thousand birds.

They are graceful fliers, often seen flying in a v-shaped formation and soaring using thermal currents. They are skilled swimmers but they do not plunge-dive for prey like their coastal relatives, the brown pelican. Instead, they make shallow dives from the surface or just plunge their heads underwater. They have been known to hunt cooperatively; to do this several birds line up and corral fish into shallow water where they are easily gulped up.

Breeding occurs in the summer months after birds reach breeding colonies. Birds pair up and both males and females create nests in open, flat soil. They use their beaks to dig wide, shallow depressions with an eight inch lip to keep water out. Nests are sometimes lined with grasses but white pelicans to not usually forage for nesting materials. Pairs build nests nearby other pairs in similar breeding stages so that chicks will be relatively the same size when they hatch. Two chalky white eggs are laid and incubated for about 30 days by both male and female birds. Although two eggs are laid typically only one chick survives after hatching. Chicks form groups called crèches in order to stay warm and safe while parents are away searching for food. Fledging occurs around 9 – 10 weeks.

American white pelicans are listed as least concern by the IUCN, although this species is protected by the Migratory Bird Treaty Act of 1918. Their populations were alarmingly low by the mid-twentieth century due to hunting, chemical pesticides such as DDT and habitat loss. Today, due to protective legislation and increased public awareness, their numbers have recovered significantly. Still, they are threatened by habitat loss due to flooding or drainage of lakes, disturbances to breeding colonies and retaliation for preying on fish in commercial hatcheries.