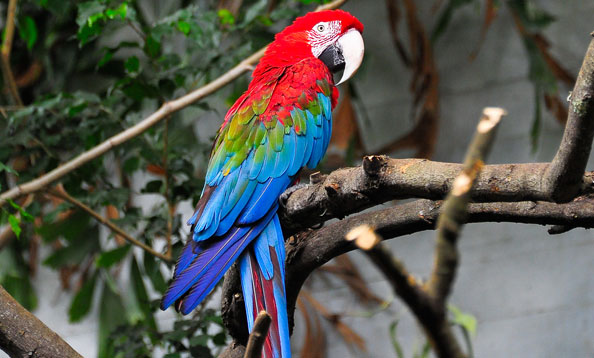 You can see our green-winged macaws at Puente Al Sur.

The green-winged macaw is mostly red, with blue and green wings, a blue tail and gray legs. Their face is white and striped with small red feathers. Both male and female birds have the same coloration. Their large, hooked beak is whitish on the upper part while the lower beak is black. When moving through trees they use their beak as a third leg to help with climbing.

These large birds can grow up to three feet in length and two to four pounds in weight. Their wingspan is 41-49 inches wide. Their feet have two toes in front and two behind; this allows them to balance on tree branches better.

They are widespread in southern Central America and northern and central South America; from Panama to Argentina, east of the Andes Mountains. They are found in tropical rainforests and savanna woodlands.

Their diet consists of nuts, fruit, berries, seeds and some leaves foraged from trees. They are also known to eat clay which is high in salt and other minerals. At the zoo, they eat parrot chow, fruit, nuts, berries and seeds.

Green-winged macaws are frequently seen in pairs or family groups and occasionally gather in small flocks of up to twelve birds. Larger groups are found in feeding trees or on clay banks, where they may group with other macaws. They are fairly quiet birds but will fly while making loud screeches when alarmed.

Breeding typically occurs in December throughout their range. Nests are made in high tree cavities away from most predators. Females incubate 2-3 eggs for about 28 days; meanwhile, males regurgitate food for females who do not leave the nest during this time. Chicks fledge after 90-100 days but are not independent for 2-3 years.

Green-winged macaws are listed as least concern by the IUCN. Like many rainforest-dwelling species, they are threatened by habitat loss due to deforestation. Over-collection for the pet trade is also a concern.