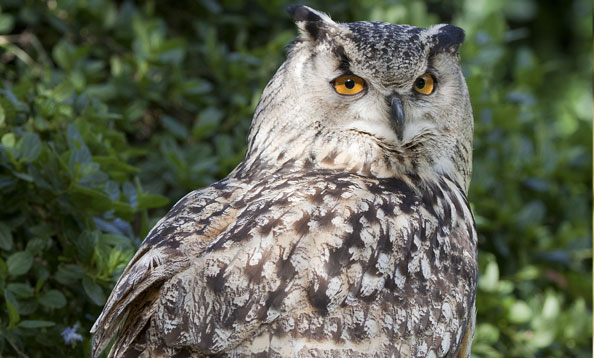 Our female eagle owl’s backstory was an unfortunate occurrence. As a young owl, she was smuggled into the United States and intercepted by U.S. Fish and Wildlife Service and later placed by the agency at the Zoo and now serves as an ambassador of her species, traveling to local classrooms to educate students about wildlife conservation

Eurasian eagle owls weigh three to nine pounds and have a huge wingspan of up to six feet. Like many birds of prey, females are larger than males. Both males and females are mottled buff-brown with dark bars on the breast, wings and tail. Underparts are pale and the facial disc is grayish-brown with a black beak. Coloration and size vary based on geographic location, however. This species also has prominent ear tufts and bright orange eyes.

Most owls, eagle owls included, have special adaptations as nocturnal hunters. Comb-like edges on flight feathers allow them to fly in near silence as they approach prey. Owls have large eyes for well-developed sight in the dark; in fact, their eyes are so large that they cannot rotate in the socket. Instead, owls have 14 vertebrae that allow for greater neck flexibility- up to 270 degrees. Owls also have an acute sense of hearing with the help of asymmetrical ear openings.

Like other owls, eagle owls hunt at night with most activity at dawn and dusk. The majority of their diet consists of small rodents, but may also include birds, reptiles and large prey such as fawn or foxes.

These owls tend to be solitary but form monogamous pairs during mating season. They are quite territorial, and even more so during nesting season. Eurasian eagle owl calls are unique to each individual but are typically a deep, resonant “ooh-hu” or “uh-hu”; female calls are a little more high-pitch.

Eagle owls pair in the fall and breeding occurs shortly afterward. Males call frequently and build a nest in a shallow depression to attract females. Nests are usually located on cliffs, in cave openings or on the ground. Up to four white eggs are laid, with a three-day interval between each. Females incubate eggs for 34-36 days while males bring food to the nest. Owlets are white and fluffy after hatching but develop quickly, feeding themselves at the nest after only three weeks. Young are able to fly by seven weeks and owlets are independent at 20-24 weeks.

Eurasian eagle owls are listed as least concern by the IUCN. The wild European population was estimated at 19,000- 38,000 pairs in 2004; the Asian population is unknown. There have, however, been declines in local populations, as well as regional extinctions. Overall population density is low as habitat loss has taken a significant toll on the species. Additionally, poisoning via agricultural pesticides and deaths through road traffic and barbed wire are also threats.

Eagle owls are subject to relatively high levels of commercial pressure, and are coveted by hobbyists; they have been protected from international trade by the Convention on International Trade in Endangered Species (CITES) since 1977. Legal protection in many parts of Europe has helped some populations to recover, as have captive breeding and reintroduction programs.

The Eurasian eagle owl is one of the species managed by the AZA’s Population Management Plan program, the goal of which is to maintain species in healthy, genetically diverse populations. Reproduction in the North American captive population is coordinated by staff at the San Francisco Zoo & Gardens.