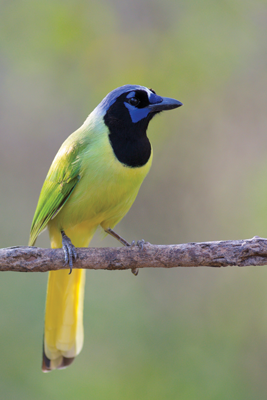 You can find our green jays in the South American Tropical Rainforest and Aviary.

Green jays have long tails, a small crest on top of their head and are similar in size to blue jays. This colorful bird has green upperparts and a pale green to yellowish belly. Their head is black with vibrant blue cheek patches that connect across the base of the black bill. Blue patches are also above the eye, on the crown of the head and nape. A patch of white or pale blue feathers separate the eyes.

This colorful bird has a green body, yellow breast, black head and a blue face. They are about the size of a blue jay. Individuals in the southern population are slightly larger than the northern ones.

Green jays are found from southern Texas to northwestern Honduras, as well as northern Venezuela west following the shape of the continent to Bolivia. They thrive in a wide range of habitats across Central and northern South America. In Texas these jays are found in woodlands, citrus groves, and open brush. The southern populations prefer humid rainforests, lowlands and montane forests.

These birds are omnivores and eat fruit, a variety of insects, seeds, spiders, eggs, other birds’ chicks, small rodents and lizards.

Green jay breeding behavior and group size varies based on the location. The northern population tends to be solitary in nature and nest from April-June. Green jays in Central and South America are usually found in small flocks of 3-9 birds; including one adult pair and their juvenile young. Breeding and nesting season for these birds occurs from March-August.

Both populations exhibit monogamous pairing and create similar nests, usually a flimsy cup-shape made from twigs then lined with grasses and moss. Males may help feed the female while she incubates 3-5 pale green eggs for 17-18 days. Chicks are able to fly around 19-22 days and independent about three weeks after fledging. Green jays in the south practice cooperative breeding, where juveniles from the previous clutch help to feed new chicks.

Green jays are listed as least concern by the IUCN and have no current threats.