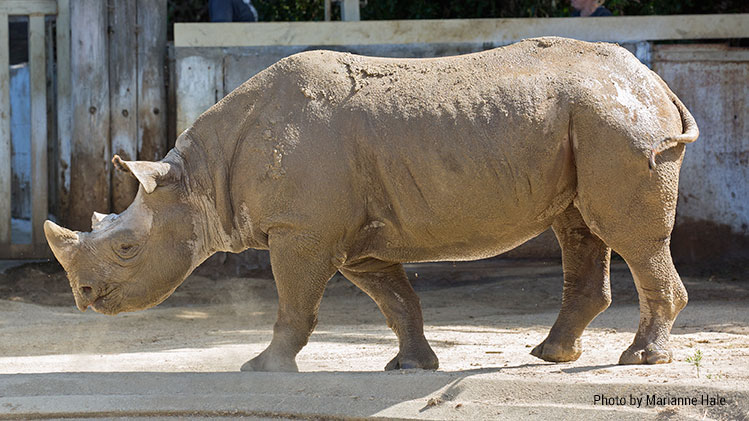 Our black rhino can be found across from Cat Kingdom, and next to the Nile hippopotamus.

An adult black rhinoceros can weigh up to 3,000 pounds with a body length of 10 to 12.5 feet. A thick, wrinkled, tough hide protects the rhino as it pushes its way through the thorny acacia trees and bushes it likes to eat. The rhino uses its prehensile upper lip to strip nutritious leaves off tough branches.

The black rhinoceros is distinguished by two large horns on its nose, the front one being the largest. These horns can measure up to 50 inches in length and are made of hardened compressed hair-like fibers on a bony base. They have small eyes and are extremely nearsighted, making the rhino dangerous and unpredictable, and likely to charge unfamiliar sounds and smells. However, their excellent sense of smell gives them information about their surroundings and helps them detect danger. They have prominent, erect ears that can swivel to pick up even the quietest sounds.

Black rhinos are herbivores and are browsers, not grazers. In the wild, they eat bushes and shrubs, preferring acacia, twigs and new growth. At the Zoo, the rhinos are fed a diet of alfalfa, hay, fruits, vegetables, browse and acacia.

These rhinos feed in the morning and evening and sleep in the shade or in a wallow during the hottest part of the day. Wallowing in mud helps to keep them cool, and gives them protection from flies and biting insects. Rhinos are often accompanied by tick birds and cattle egrets, which feed on insects stirred up by the rhinos’ feet.

Black rhinos are solitary animals, only coming together to mate. Breeding occurs throughout the year although males do not reach sexual maturity until 10-12 years of age and females 6-7. One calf is born after a gestational period of 419-478 days. Calves will stay with the mother for up to three years, with weaning beginning around two months.

Black rhinos are Critically Endangered. Before 1960, the population of black rhinos throughout the eastern and southern parts of Africa was approximately 200,000. Due to large-scale poaching, 90% of the rhinos in existence have now been killed. There are more than 5,000 wild black rhinos alive today, an increase from low numbers due to aggressive conservation efforts, and many of those are protected by armed guards.

Rhinoceros horns are highly valued by some cultures for traditional medicines and for decorative dagger handles. As a result, the black rhino has been hunted nearly to extinction. Rhinoceros populations have also come under pressure as a consequence of bush clearing for agriculture and firewood.

The Zoo manages its black rhinos under the Association of Zoo and Aquarium’s Species Survival Plan for Black Rhinos.

What can you do to help black rhinos?