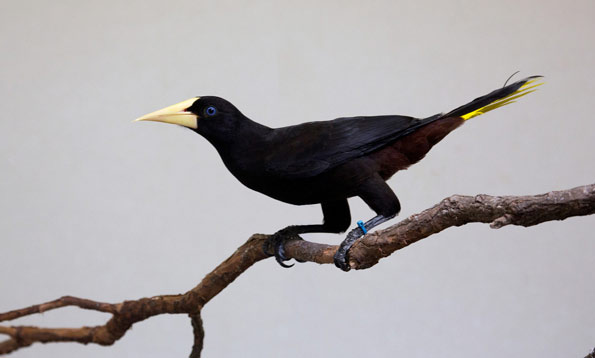 You can find the oropendolas in the South American Tropical Rainforest and Aviary.

Crested oropendolas are medium size birds, usually 14-18 inches long and weighing 6-10.5 ounces. They are mostly black with a chestnut rump, bright yellow tail and pale yellowish bill. Males possess a black crest along the head. Females are smaller, have a duller coloration and a less pronounced crest. This species has vivid blue eyes and the bill is cone-shaped.

Lifespan is up to 20 years under human care.

These birds have a large range from Costa Rica to northeastern Argentina; including much of the Amazon basin, east of the Andes. They are primarily found in tropical lowland forest edges and clearings.

It feeds from the upper forest canopy on large insects, fruit, nectar and small vertebrates.

Crested oropendolas are found in small flocks made up of 15-30 females and 3-4 males. A dominant male will mate with several females during each breeding season. Courtship consists of an elaborate bowing display where the male hangs upside down, shaking its tail, fans its wings and calls loudly.

Breeding season occurs from November to April throughout most of its range; while females construct nests from January to March. These elaborate teardrop-shaped nests are built high up in trees. Nests are woven together with palm leaves and other types of vegetation; sometimes reaching up to six feet long. Males defend the nest but crested oropendolas are often subjects of “brood parasites”. Giant cowbirds regularly lay eggs in other birds’ nests, relying on the host parents to incubate and raise their chicks.

A clutch of two pale greenish-grey eggs are laid and incubated for 17-19 days. Females care for the chicks while males guard the flock. Young fledge after about a month.

Crested oropendola are listed as least concern by the IUCN. They are common but threatened by deforestation, which limits their prey and nesting sites.