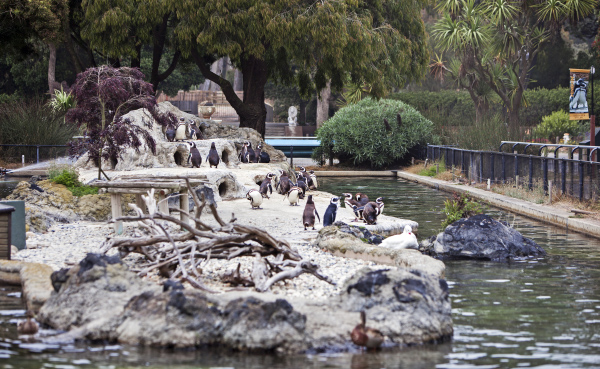 Our colony of Magellanic penguins is located on Penguin Island across from the Lion House. While these flightless black and white seabirds appear identical they are actually quite diverse in personality, disposition and markings, as the penguin specialists attest to!

Magellanic penguins are extremely social birds and can be seen “flying” through the water at speeds up to 15 miles per hour, basking in the sun, preening or hanging out in one of 36 burrows on the Island.

Contrary to common opinion, the tuxedoed birds padding about on the ice floes of Antarctica represent only two of the world’s 17 species of penguins native to the polar continent. Magellanic penguins inhabit the Strait of Magellan and the coastal regions of Argentina, Chile and the Falkland Islands, and as such, are right at home in San Francisco’s temperate, marine climate.

Penguin Island has one of the most successful breeding colonies in zoos in the world, with hundreds of penguin chicks fledged since the original reflecting pool was renovated to accommodate penguins in 1984. SF Zoo participates in the Association of Zoos and Aquariums’ Species Survival Plan for Magellanic penguins.

The 200-foot-long pool was built as one of the WPA construction projects in 1935, opening in 1940 as a reflecting pool, and later an exhibit space for squirrel monkeys, seals and even Humboldt penguins before its renovation in 1984. At that time, the central island was landscaped with 35 tons of black volcanic rock similar to that found in the penguin’s natural habitat and fitted with custom-made fiberglass burrows for the birds to use as nest sites.