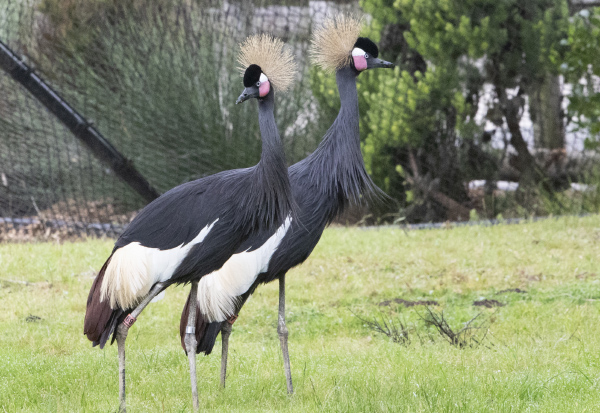 They are named for the striking, straw colored bristle-like feathers on the top of their heads. They are mostly black with white upper and under wing coverts and a black head. The legs and bill are black, eyes are light grey, facial skin is white and red, and throat lappet is scarlet. There are large white cheek patches with a small red patch at the top. The bill is proportionally shorter than in other cranes. They have long legs for “wading” through the grasses. They have a special grasping toe which allows them to roost in trees, which is an unusual feature for a crane. They have large wings for excellent flying ability. Immature cranes are mottled brown. The cranes’ long legs and excellent peripheral vision help them spot predators in the tall savanna grasses.

Although they inhabit different areas of Africa, both West and East African crowned cranes live in similar habitats, residing in grasslands alongside wetlands where they can feed on insects, reptiles, and small mammals. They are found in marshes, cultivated lands and grassy flatlands near rivers and lakes.

These cranes are omnivores, eating plants, seeds, grain, insects, frogs, worms, snakes, small fish and the eggs of aquatic animals. Stamping their feet as they walk, they flush out insects which are quickly caught and eaten. The birds also associate with grazing herbivores, benefiting from the ability to grab prey items disturbed by antelopes and gazelles.

Both West and East African crowned cranes engage in elaborate courtship dances, which includes bowing, hopping, running, jumping, wing-flapping, and vocalizations, for which they enlarge their gular sac to create a booming call. Both sexes dance, and immature birds join the adults. Dancing is an integral part of courtship, but also may be done at any time of the year. After mating takes place, both the male and female incubate their clutch of 2 – 5 eggs, which hatch after 28 – 31 days. They are social and gregarious during most of the year, living in pairs or family parties and congregating in flocks of up to 100 birds. They emit a trumpeting call of “u-wang u-wang” and also a guttural grunt. Their loud, melodious call, usually given in flight, may have given rise to some of the beliefs held by African tribes that the cranes bring rain; many tribal groups have incorporated the cranes’ dances into their own rituals.

During the breeding season, pairs of cranes construct a large nest of grasses and vegetation on marshy ground, in trees, in shallow water or riverbeds. Two to three glossy, dirty-white eggs are laid, and both parents take turns incubating them for 30 days. Chicks are precocial, can run as soon as they hatch, and fly in 10 weeks.

Crowned cranes are the only cranes to perch in trees, with a partiality for solitary trees that afford a wide view. They fly with neck extended forward and legs stretched horizontally behind the tail, but when perched, may tuck their feet under their breast feathers in cold weather.

Many swamps and marshes where crowned cranes nest are being drained for agriculture or destroyed by pesticides. Crowned cranes are popular attractions in zoos and are often victims of illegal animal trade. Though not yet considered endangered, their future is far from certain.

We have both West and East African crowned cranes living in our African Savanna habitat. They share their exhibit with giraffes, zebras, kudu and ostriches.