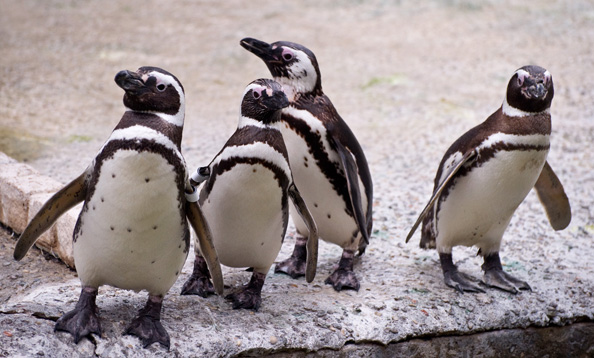 San Francisco Zoo &  Gardens maintains the largest and most successful breeding colony of Magellanic penguins under human care since 1985. The Zoo also participates in a nationally-coordinated Population Management Plan sponsored by the Association of Zoos and Aquariums.

The penguins live on Penguin Island, located between the Lion House and Pachyderm Building.

Penguins are highly specialized flightless sea birds. Their feathering is very dense, with more than 70 feathers per square inch, each coated with oil for waterproofing and warmth. Due to their excellent insulation, penguins are actually in greater danger of overheating than freezing.

These penguins can be identified by a characteristic white stripe that curves from their eyes around side of the head and meets under the chin. Adult penguins also have a dark black band across their chest. Young penguins first exchange their silvery down for an immature set of soft gray feathers without the distinctive striping of the adult. They molt into their adult coloration in their second year.

Penguins, along with many other species, possess a unique type of camouflage called counter-shading. Their white belly blends in with the bright light above and their dark back blends in with the ocean below, making the birds hard for seals to spot.

The bodies of penguins are torpedo shaped and streamlined for moving through the water at speeds up to 15 miles per hour. Their small, flat wings work like paddles, driven by powerful flight muscles to propel the bird through the water.

Lifespan in the wild is 25 years, and up to 30 years under human care.

These penguins inhabit the rocky shores of along the coast of southern Chile, south to Cape Horn, the Patagonian coast of Argentina, and the Falkland Islands.

Magellanic penguins eat squid, cuttlefish and sardines while at sea. When nesting, they fast, using up stores of fat in their bodies. At the zoo, they are hand-fed a diet of herring and capelin.

Magellanic penguins often travel in large groups when searching for food in open ocean. They are migratory, traveling south to breed and raise chicks. Nearly 200,000 birds have been known to accumulate in their summer breeding grounds. They make a wide variety of sounds, including a moo, bleat, cackle, and two-toned bray, which are thought to be important for locating mates and chicks in such crowded settings.

During the breeding season, these birds gather in nesting colonies, digging burrows underground or making shallow nests under bushes with up to 20 nests per 300 square feet. They vacate their nest sites in winter, but use them again each year. They lay two eggs, but generally raise only one chick to adulthood. Eggs are incubated for 40-42 days; once hatched both parents care for the chicks, taking turns finding food and regurgitating it for young. Chicks fledge at 40-70 days, up until this time they are covered in a fluffy down.

Magellanic penguins are listed as near threatened by the IUCN. There are still approximately 1.3 million pairs of wild Magellanic penguins on the coasts of Argentina and Chile, but the large breeding colonies are vulnerable to oil spills, destructive guano mining for fertilizers, and declining fish populations.

Oil pollution is thought to kill more than 42,000 penguins every year along the Argentine coast, and El Nino Southern Oscillation events may cause considerable disruption to breeding cycles, as fish stocks, upon which adult birds depend to feed their young, change drastically during El Nino. As global climates change, penguins may be in serious danger; shifts in the marine food web directly affect this species.

What can you do to help Magellanic Penguins?