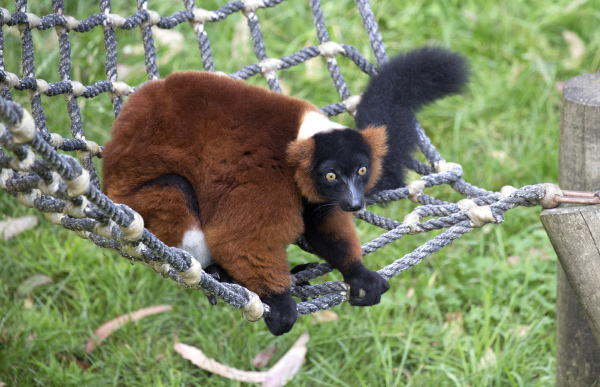 Red ruffed lemurs are among the seven different species of lemur that reside in the lushly forested Lipman Family Lemur Forest.

They are one the two subspecies of ruffed lemur – the other being the black and white ruffed lemur. The larger red ruffed lemurs weigh 7 – 10 pounds, and measure between 1 1/2 feet to 2 feet in length. Considered one of the most beautiful of the lemurs, the red ruffed lemur has a soft, thick orange-red coat, a black head with a fox-like muzzle, and a ruff of reddish fur around the head. The belly, hands, feet, and long, bushy tail are all black while the nape of the neck may have a patch of white fur.

Red ruffed lemurs use a specialized claw on the second toes of their hind feet to brush their coat. Scent glands used for group identification are located on their rump. Because lemurs cannot manipulate their fingers well, their six bottom teeth form a “toothcomb” they use to groom themselves and other members of their social group.

Red ruffed lemurs are frugivores. In the wild, they primarily eat fruit, but will also eat leaves, flowers, nectar and seeds. At the Zoo, these lemurs are fed a similar diet.

Ruffed lemurs live in groups of two to ten individuals, usually consisting of a mated pair and young offspring. They are crepuscular and arboreal, spending most of their day feeding, traveling and resting high up in the forest canopy.

Red ruffed lemurs breed seasonally at the beginning of the wet season when food is plentiful. Females are sexually mature at 2 years of age with a gestation of 90 – 102 days.

They can have up to six offspring, though they usually have three. The young are born in a nest built by the female and are born with fur and their eyes are wide open. Red ruffed lemurs do not carry their young on their backs. Like birds, they leave their young in the nests while they forage for food.

Red ruffed lemurs are listed as critically endangered by the IUCN and are protected under Appendix 1 of CITES. Major threats include habitat loss, hunting and capture for pet trade. The red ruffed lemur naturally has a small geographic range and low numbers, making it highly sensitive to pressure put on their population. Estimates suggest there are perhaps as few as 1,000 left in the wild.