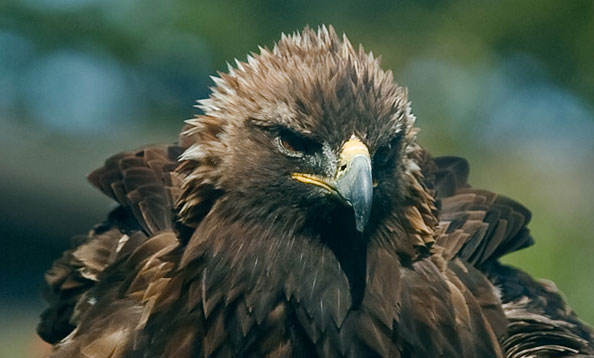 Our golden eagle resides in the Koret Animal Resource Center.

The golden eagle is the largest bird of prey in North America. They have a long, broad wingspan of up to 7 feet and weigh between 6-15 pounds. Females, like with other raptors, are larger and heavier than males.

Adult birds are primarily brown, with golden brown on the back of the crown and neck, and some grey on the wings and tail. Coloration tends to fade over time with sun exposure. The bill is dark at the tip, fading to a lighter color, with a yellow base. Legs are feathered and large talons are yellow.

Juveniles are darker in color, with white patches in the flight feathers which may be divided by darker feathers, and a large amount of white on the tail with a black band at the tip.

Lifespan is about 30 years in the wild, and up to 46 under human care.

Golden eagles are one of the most widespread birds of prey. They are found across Eurasia, northern Africa, and western North America in a variety of habitats. They tend to prefer open habitat in mountainous areas, as well as tundra, grasslands, woodlands and along bodies of water. Most do not migrate seasonally; this is only true for birds living in the northern part of their range.

They prey mostly on small and medium rodents but will also eat reptiles, fish, other birds, carrion and even young deer and foxes. At the zoo, our golden eagle eats a diet of rat, herring, mice and rabbit.

Golden eagles are usually found alone or in pairs, but may form small groups of juveniles or around large sources of food. Pairs of golden eagles have been observed hunting cooperatively; where one bird chases prey and the other swoops in to catch it. They are monogamous and may mate for life.

Breeding season varies throughout its range but typically occurs between March and August. Courtship includes acrobatic flight in which both birds circle, dive and tumble through the air. Both male and female help build the nest in a tree, cliff ledge or occasionally on man-made structures. Nests are made from sticks to create a large platform and lined with grasses, leaves and moss. A clutch of one to four, but usually only two, white and brown speckled eggs are laid in three day intervals. Eggs are incubated for about 40-45 days; in the meantime the male brings food to the female who does most of the brooding. A few weeks after chicks hatch the female takes over finding food for chicks. Young golden eagles are able to fly around 60-70 days but are not independent for another 32-80 days.

Golden eagles are generally quiet birds; although, during breeding and brooding season they have been known to make up to nine unique sounds.

Golden eagles are listed as least concern by the IUCN. Like the bald eagle, their population drastically declined in the early part of the 20th century due to human-caused disturbance and conflict. Golden eagles were intentionally poisoned and shot by farmers who believed that eagles preyed upon domesticated livestock. Today, the Bald and Golden Eagle Protection Act prohibit the hunting or sale of eagles or eagle parts. Due to increased protection and banning of pesticides like DDT their populations are stable throughout much of their range. Threats still include poisoning due to lead ammunition, prey loss and collision with vehicles and wind turbines.