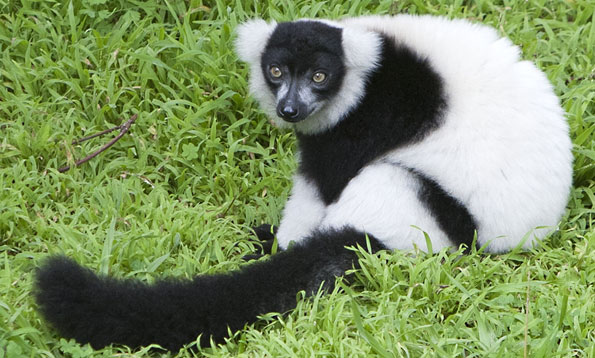 Look for black and white ruffed lemurs in the trees of the Lemur Forest – they love to climb!

The Zoo has seven different species of lemurs in the Lipman Family Lemur Forest. This exhibit features a lushly forested area and an elevated boardwalk to provide guests with exciting viewing perspectives of these lively primates.

There are two subspecies of ruffed lemur, the largest members of the living Lemuridae family. The black and white ruffed lemur and the red ruffed lemur are very similar, but differ in coloration, as suggested by their names. Weighing up to 9 pounds, these animals have thick, soft, woolly fur, piebald black and white, with a white ruff that frames the face. Although their ears are hidden by hair tufts, ruffed lemurs have excellent hearing. Patterns and distribution of color vary; often the right side varies from the left. They have a fox-like muzzle with a wet nose.

Their distinctive golden eyes have some stereoscopic vision but no cones – the basis for color vision – in the retina. They are well adapted for life in the trees, with grasping fingers and toes. The thumbs and great toes are semi-opposable. Ruffed lemurs also have a large grooming claw on the second toe of the hind foot. Life span is 15 years in the wild and 19 years under human care.

Black and white ruffed lemurs are found in eastern Madagascar in the coastal rain forests, at the canopy level.

In the wild, they are primarily frugivores but will also eat leaves, seeds and nectar when fruit is scarce. At the Zoo, they are fed a diet of fruits, vegetables and monkey chow.

Black and white ruffed lemurs are diurnal and arboreal; walking and running on all fours over middle to large-sized branches, jumping from the extremity of one branch to cling to another.

This particular species typically form small family groups including a mated pair with two to five young but have also been found in larger, loosely organized groups of 18-31 individuals. As with most lemur species, black and white ruffed lemurs are matriarchal. Groups are territorial and use scent marking and loud calls to their neighbors to establish ranges, often in a sequence that is given by one group to another. Lemur calls are heard mostly from 5:00 to 7:00pm, though at the Zoo, the lemurs can be heard throughout the day.

Mating season in the wild is between May and July. Births are usually twins or triplets, and occur in September and October. Though their eyes are open and they are fully furred, the young are too weak to cling to the female so they are placed in a nest of branches and leaves. The mother builds the nest before the young are born, and lines it with fur plucked from her flanks. No other true lemur builds a nest. The infants remain in the nest for about 3 weeks. When out of the nest, the young are carried in the female’s mouth and often deposited in a convenient place while she forages. By 5 weeks of age, they begin to climb through trees with the rest of the group. Although this species grows quickly, infant mortality is high due to injuries from accidental falls.

The black and white ruffed lemur is listed as critically endangered by the IUCN and is on Appendix I of CITES. Lemur numbers are declining due to human destruction of its forest habitat and commercial exportation to the U.S., the largest importer of primates.