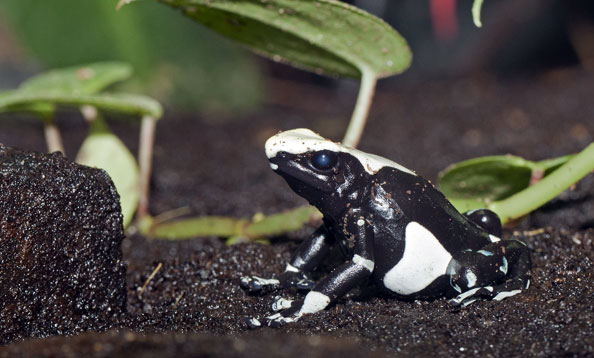 There are over 175 species of poison dart frogs in the family Dendrobatidae; all have bright coloration (aposematic coloration), which warns predators of their toxic skin secretions. They are small frogs, most are no bigger than a paper clip. They have a long, sticky tongue that darts out and captures their prey. Their feet contain four toes, each with a flattened tip and a suction cup pad used for gripping and clinging to vegetation in its habitat. They lack webbing between their toes and are poor swimmers; they are usually found near water but not in it.

These frogs are found in tropical rainforests in north and central South America. They are diurnal, terrestrial, and carnivorous, eating small invertebrates, particularly ants, which give them their poisonous properties in most cases. In the Zoo, they eat pinhead crickets and fruit flies.

The males are territorial, calling to advertise to females and to defend their area. Calls are species dependent and can be anything from a buzz to trilling whistles. Females are slightly less territorial and do not call, but will wrestle with other females over their space. They can live 3-15 years in the wild and up to 20 years under human care.

Many species are threatened by habitat loss and over-collection for the pet trade. You can help poison dart frogs when you travel by being a savvy souvenir buyer — always ask where things come from and never support vendors who sell products made from endangered or threatened animals.