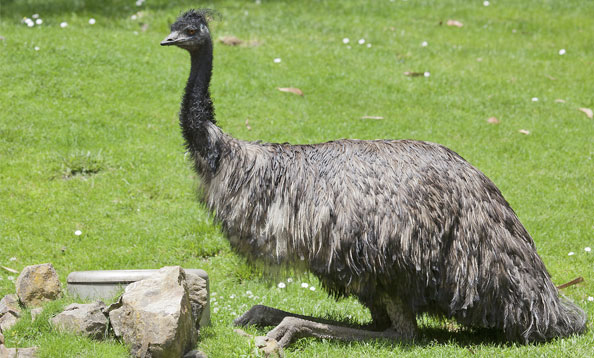 You can see our male emu in the mixed-species Australian WalkAbout.

Emus belong to a group of flightless birds called Ratites. They have brownish-grey, shaggy feathers that are less water resistant than other birds. The head and neck are sparsely covered with black feathers with whitish-blue skin underneath. Chicks have a cream and brown striped coloration that acts as camouflage.

These large birds can grow up to 6 feet tall and weigh 80-120 pounds; females are larger and heavier than males. They have large, dinosaur-like legs and feet with three toes and sharp nails. Strong legs allow them to run long distances and sprint up to 30 miles per hour.

They have small vestigial wings that are around 7 inches long and have a small claw at the tip. The emu flaps its wings while running; it is believed that this behavior helps to stabilize the large, top-heavy bird.

Emus are found across Australia, although they are found in lower density on the east coast and central desert habitats. They prefer savanna woodlands, grasslands and dry forested areas near standing water.

These birds are diurnal foragers and may travel long distances to find food. As omnivores, they feed on a variety of seeds, grasses, insects, fruit and small lizards. They also swallow stones, glass shards and bits of metal that help grind food in the digestive system. At the Zoo, they eat ratite diet, produce, hay and browse.

Emus are typically solitary birds but will sometimes form loosely affiliated groups in areas with a large food supply. During breeding season, males and females form pairs and will fiercely defend their territory. This is also the time of year when emus are heard communicating the most. They make loud booming and grunting sounds by inflating a pouch in their throat. Emus have also been heard making a hissing sound.

Breeding season typically occurs from December to January. Males create nests on the ground using grasses, twigs and leaves. Females lay a clutch of 5-15 greenish-blue eggs then go off to find another male; females have been known to lay up to three clutches in a single season. Males are left to incubate eggs for 48-56 days and care for chicks once they hatch. Chicks leave the nest after just a few days and are able to feed themselves almost immediately. Males look after chicks for up to 18 months although juvenile emus are full grown at 12-14 months.

Emu are listed as least concern by the IUCN. Historically their range included much of Australia and even a few nearby islands. This species became extinct in Tasmania sometime around 1865 and has since been eliminated from two other Australian islands. Their population decline was due to unregulated hunting for meat, oil and eggs. Today, they are threatened by habitat loss, drought and wildfires.