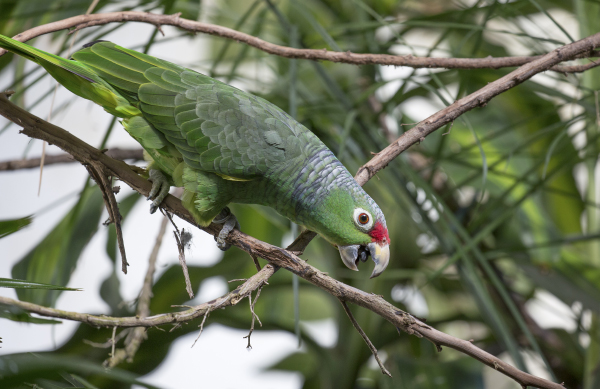 You can find the Salvin’s amazons in the South American Tropical Rainforest and Aviary.

Male and female Salvin’s Amazons are similar in appearance. They have primarily green plumage with red “lore” feathers around the forehead, blueish feathers on the crown of the head and some red tail feathers. Unlike the similar red-lored Amazons, they lack yellow markings on their cheeks. They have powerful gray beaks. They are approximately 14 inches in length and weigh between 11 – 17 ounces.

Salvin’s Amazons are found in eastern Nicaragua south to southwest Colombia and northwest Venezuela. These parrots are arboreal and found in tropical rainforest canopy, as well as other types of lowland forests and woodlands.

They eat a variety of fruits,as well as seeds, flowers, buds, nuts and even coffee beans.

It is thought that Salvin’s Amazons mate for life. They engage in mutual preening and partner feeding. They stay in flocks, except during the breeding season when they form pairs.

A clutch of 3 – 4 eggs is laid in a tree cavity where the female will incubate them for 26 days. Males will help tend to the chicks after they have hatched.

Salvin’s amazons are listed as Least Concern by the IUCN.