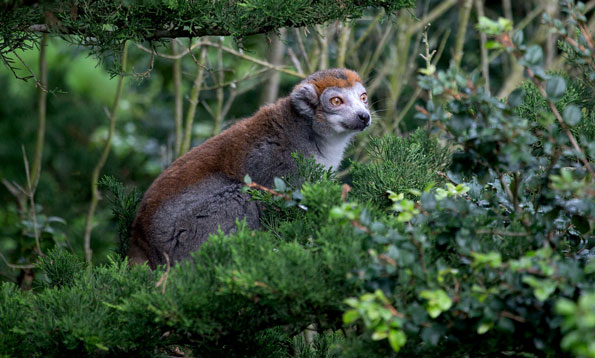 The Zoo has seven different species of lemur in the Lipman Family Lemur Forest. This outdoor habitat features a lushly forested area and an elevated boardwalk to provide guests with exciting viewing perspectives of these lively primates.

This species of lemur is named for the v-shaped “crown” pattern of fur on their heads. Males have chestnut brown backs, lighter-colored fur on their bellies and a distinct black and orange crown. Females are grey with cream colored bellies and a grey and orange crown. Both males and females weigh between 3-4 pounds. They use their long non-prehensile tails for balance while climbing.

Lifespan under human care is up to 27 years.

Crowned lemurs and found at the very northernmost tip of Madagascar, in dry and semi-dry deciduous forests. They inhabit all levels of the forest canopy.

They feed on fruits, leaves, flowers and occasionally on insects, small vertebrates or eggs.

They live in mixed groups of 5 – 15 individuals and, like other lemurs, are matriarchal. Throughout the day they will split into smaller groups and are often found sharing a range with Stanford’s lemurs.

Crowned lemurs are mostly active during the day but are sometimes found to be nocturnal. They communicate through vocalizations, scent marking, body language and bond through grooming. They will vocalize to keep track of the other members of the group while foraging in the trees.

Females give birth to one or two offspring after a gestation period of 125 days. Young are born in the rainy season, when food is most plentiful. Infants are carried on their mother’s front until they get too heavy and are switched to the back. Young reach maturity at 20 months.

Crowned lemurs are listed as endangered by the IUCN and on Appendix I of CITES. Habitat loss due to slash-and-burn agriculture, charcoal production, mining and illegal logging are major threats to lemurs. They are also hunted for food and collected for local and international pet trade.

The San Francisco Zoo participates in the Association of Zoo and Aquarium’s Prosimian Taxon Advisory Group and the Malagasy Fauna Interest Group.